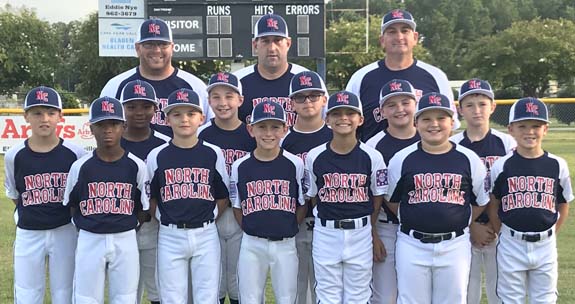 RUSTON, La. – Matthew Lutz and Sam Wallace combined to pitch a 2-hitter as Montgomery, Alabama defeated Elizabethtown 2-0 on Saturday night in the opening round of the Dixie Youth Baseball AAA (Minors) World Series.

Elizabethtown will play Louisiana Sunday at 4:30 p.m. Eastern time in an elimination game. Louisiana lost its opening round game 2-0 to Mississippi.

The best scoring chances for Elizabethtown came in the third and fourth innings. Collin Cole drew a lead-off walk in the third. Jaxon Hair laced what appeared to be a single to right field, but a strong quick throw by the fielder forced Cole at second base. A sharp ground ball turned into a double play that ended the inning.

In the fourth inning, Braylon Cromartie ripped a single through the middle with one out, and Jayce Hatcher smacked a one-hopper that was speared by the first baseman near the bag to end the inning.

Cole laced a two-out single to center field in the sixth inning for the other Elizabethtown hit.

Lutz flipped a single over shortstop to begin the Alabama third inning, advanced on a wild pitch and a fielder’s choice, before Aidan Braxton drove him in with a two-out single.

Braxton reached on a fielder’s choice with two outs in the fifth, stole second base and darted home on Oliver Blackburn’s single for a 2-0 lead.

Cromartie kept the game close with a diving catch of a sinking bloop behind the mound that ended the fourth inning and left two Alabama runners in scoring position.

Lutz pitched the first four innings for Alabama and gave up a hit and a walk while striking out four. Wallace struck out two in his two innings on the mound and allowed one hit. Wallace also cracked two hits to lead the Alabama hitters.