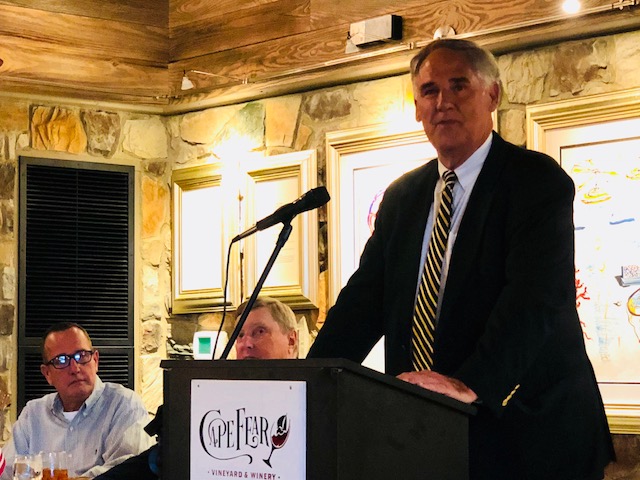 The Bladen County Committee of 100 conducted their annual meeting on Wednesday evening at Cape Fear Vineyard and Winery.  The keynote speaker for the evening was Dr. Barry O’Brien, Dean of and Associate Professor of the UNC-Pembroke School of Business.

O’Brien said when he first arrived in July 1, 2016, at UNC-Pembroke the incubator was empty. Now, it is full and 2,500 people per year come to the Center for Entrepreneurship.

“We have a program funded by the Kaufman Foundation and I will make this commitment to your downtown incubator when it opens. We’ll provide the coffee and the donuts—what we do with these cups of coffee happens in about 250 cities throughout the United States once per month—We invite two people from Bladen County to present their idea about a business,” said O’Brien.

He said this has been done in Red Springs, St. Pauls, Fort Bragg and Camp LeJeune. O’Brien said they will listen to the presentations and help them with their business idea.

He also spoke briefly about an honors course he teaches called “The Economics of Social Issues.” O’Brien said he enjoys the course and enjoys seeing the students when they gain an understanding of the concepts.

“There are more Americans working today than any time in history,” said O’Brien.

He said the national unemployment rate is stable at 2 percent. O’Brien said the treasury rate is at 2.8 percent and that interest drives the rates on mortgages and commercial loans.

He also discussed the trade deficit and technology and how they impact the economy.

O’Brien said the entrepreneur is important to the economy as they take an idea and the technology available and develop goods and products consumers want to purchase.

He said production in the United States is the highest it has ever been. O’Brien said it is important to teach children about capitalism and entrepreneurship.

Following O’Brien’s discussion, the group elected Pat DeVane, Hayes Petteway, Wilbur Ward, and Dennis Troy to the Committee of 100 Board of Directors.

Leon Martin gave the treasurers report. He said currently the Committee of 100 has assets totaling $16,969 and there are no liabilities.

Bladen County Economic Development Director Chuck Heustess gave a brief update of projects. He said Chemours is preparing to make a $100 million investment in an incinerator to capture wastewater and emissions from the plant and dispose of them.

Heustess said the downtown incubator in Elizabethtown should be open in the next couple of months. He stated Bladen Community College’s Small Business Center is planning to occupy one of the spaces.

Heustess also noted that there currently are no empty buildings in Bladen County for an industry to locate. He said that is why it is so important that a new speculative building be constructed in the Elizabethtown Airport Industrial Park. Plans are moving forward for a new 24,000 square foot building.

Tags: Entrepreneurship and Small Business topic of Committee of 100 meeting