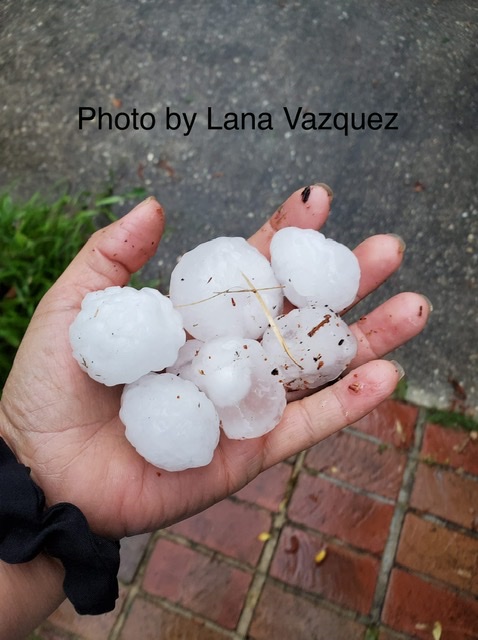 Bladen County and other parts of North Carolina were hit hard by the fury of hail on Friday, May 7, 2021. Residents and farmers are still surveying the damage and destruction the freak storm caused.

Roof damage, car damage, and maybe worst of all, the destruction of crops have all been reported due to the quarter-sized to golf ball-sized hail that fell from the sky on the May morning a little over a week ago. 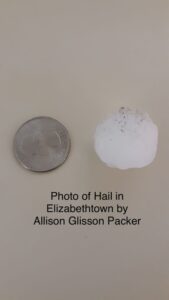 Several Elizabethtown, Ivanhoe, and White Lake residents say they are either having their roof repaired or replaced due to their homes’ damage during the storm. John White with MKE Metal Roofing in Bladen County reports his company is busy. They offer free estimates and a 40-year warranty on fading and rust.

Body Shops around the area are offering free estimates for vehicles struck from the raining balls of ice.

Tyrone with Zig’s Detail and Body Shop in Elizabethtown said, “I’ve probably looked at 50 vehicles myself; that doesn’t include the insurance companies coming and doing estimates.”

Last but not least, some blueberry and grape farmers have lost their crops. Vince Ferrante, Executive Vice President with Carolina Blueberry Growers, said, “There were several farms that had significant damage.”

“It wiped out the blueberries and grapes on the 41 farm down from White Lake,” Randy Johnson, a North Carolina Grower, reported about the J.E. Mote Farms.

Ralph Carter, President of the NC Blueberry Growers Association, said, “We are working on trying to get an idea of how much it has affected the county and the state. Growers were hit at different capacities.”

May is harvest season for blueberry farmers, but due to the hail storm and other weather conditions, the harvest picking has been light so far, according to Carter.

Carter and Johnson both explained that crop adjustors had been out to farms to evaluate the destruction and continue to monitor the affected farms to survey the impact of the hail storm.

Carter estimates the destruction’s impact could result in a 20 to 30 percent reduction of blueberry crops.

The full impact of the hail storm on North Carolina property owners and farmers has yet to be determined; however, the results in some cases have been devastating.