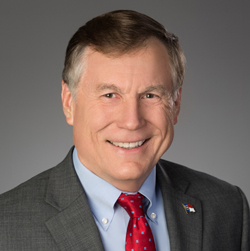 Every year, the show’s moderator, Tom Campbell, along with his panel of analysts, selects one person who has made significant and important contributions to the state and honors them on the last show of the year. This year, Campbell also solicited input from viewers and readers.

“I am humbled by this distinction,” Causey said. “It is truly an honor to be nominated alongside some of the most influential men and women in North Carolina. Thank you, NC SPIN, for providing fair and balanced discussions on the issues that affect all of us in this state and thank you for this award, which I will cherish the rest of my life.”

Campbell says Causey was named Tar Heel of the Year for his role in working with the FBI to indict N.C.’s largest political donor and insurance tycoon Greg Lindberg. Campbell added Causey’s call for the resignation of Blue Cross and Blue Shield of North Carolina’s CEO Patrick Conway for driving under the influence with his children in the vehicle shows the commissioner’s commitment to ensure sound leadership for the state’s largest insurer.

“We hold our elected public servants to high standards and Mike Causey lived up to and exceeded those expectations by discovering and revealing deceptive insurance practices and political corruption in our state,” Campbell said. “He also had the courage to call for the resignation of the CEO of our state’s largest insurer following misconduct and deceptive attempts to cover it up. These contributions, along with others, did not get a lot of media attention, but reveal character and leadership that impact every life in our state and are worthy of our recognition.”