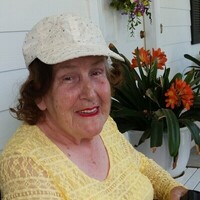 Marcia Ann White Thompson, age 85, passed away peacefully of Covid pneumonia at Compass Rehab of Conway. She was born January 27th 1935 to Asa Clark White and Idell Ward White at home in the farming community of Bladenboro, N. C. She was the 11th child born to a family of 12. She was often lovingly referred to as the “knee-baby”. Times were difficult during her childhood in the Great Depression even though they owned their historic farm. NC land grants were purchased by her third great grandfather after his service in the Revolutionary war. She graduated from Bladenboro high school. She married soon after graduation and moved with her husband to Flint, Michigan. At that time, many southerners went north to work in the automobile factories. In the next three years, she had three children. After ten years in the cold North, the family moved back to the South. Many years after her return, she had one more son. Raising her last child and helping care for and babysit her numerous grandchildren filled her life.

Marcia was best known for her sense of humor and joke telling. She loved nothing more than making people smile and laugh. She also was a lover of music, especially Country music. She even wrote a few of her own tunes that she jokingly sang in efforts to evoke joy and laughter. Her grandchildren will never forget her singing, her story telling, her jokes, or even her dancing!  The “Charleston” was her favorite dance and she was quite good at it!

As her spirit now resides with Jesus her savior, she will be buried at the White family graveyard in Bladenboro, N.C with only her immediate family at graveside due to the current pandemic. Memorials may be made to NAMI www.nami.org. An online guestbook is available at www.MyrtleBeachFuneralHome.com. A very special thank you to the angels of mercy staff at Compass Rehab of Conway for the past three years of loving care and especially for risking their lives during the Covid 19 Pandemic.