Democrat Stella Anderson made a motion to dismiss both complaints and provide additional training to the entire Bladen County Board of Election members on the proper way to conduct meetings, Democrat Jeff Carmon made the second. State board Chairman Damon Circosta agreed. Republicans Ken Raymond and David Black wished for more evidence to be added to the complaints filed by Charlotte Smith, however after the motion for more evidence was made and seconded, it was voted down by the three Democrats.

View the complaints below:

On February 10th Smith received an email stating, “The State Board of Elections will hold a preliminary hearing regarding the attached county board member complaints as described in the attached meeting notice.  The telephonic meeting will take place at 2pm on Friday, February 14.  You are not required to appear in person.  You may participate telephonically…”

However, on Wednesday, February 12, Smith received another email from the State Board of Elections, “After consideration, the chair has determined that complainants and respondents will not be asked to present at Friday’s meeting.  The State Board is limited to considering the four corners of the compliant as filed, and therefore there chair will not be allowing the parties to make a presentation at this meeting.  The meeting is not a hearing and will not allow new evidence.”

Although Smith tried to speak during the telephone meeting, Chairman Circosta would not allow her to address the board.

Listen to the State Board’s Discussion on the video below. Charlotte Smith is the unidentified female voice during the meeting. The board also ruled to provide more training for the board members in regards to operating a meeting. The discussion about the Bladen County Board members starts at 16:28 in the video.

Following are the filled vacancies on 11 county boards of elections appointed during the meeting on Friday. 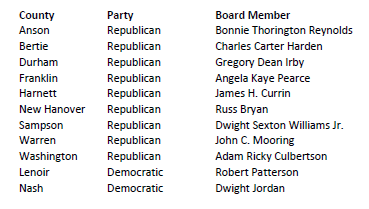