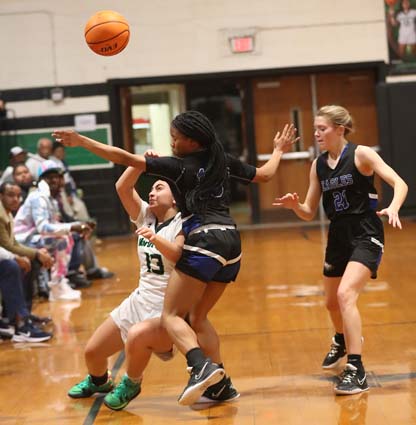 LAGRANGE – Senior Alexus Mitchell fired in 26 points, and senior Maya McDonald posted a double-double of 21 points and 10 rebounds as they led East Bladen to a 71-62 victory over No. 5 seed North Lenoir Saturday night in the 3rd round of the NCHSAA Class 2A girls basketball playoffs.

Mitchell connected on 13 of 14 free throws against North Lenoir and made 8 of 8 in the final 1:51 of the game. Mitchell also grabbed 6 rebounds. Besides the double-double, McDonald finished with 7 steals, 2 assists and 2 blocked shots. Her 3-point basket early in the final period halted a Lady Hawk rally.

“Alexus is so smooth,” said Evers. “We want her handling the ball and getting to the line at the end of games. We want Maya distributing the ball and controlling the game. That was a huge 3-pointer that she made.”

The Lady Hawks started the final period with rebound baskets by Shamaya Lynch and Noura Zayyad that sliced a once 11-point Lady Eagle lead to 48-43. McDonald answered with a 3-pointer from the right of the key that ignited a 13-3 East spurt.

Junior AnnaGrey Heustess sank 2 free throws, and junior Maegan Burney delivered a pass to McDonald for a lay-up. Mitchell nailed a 15-footer, and freshman Iveonna “NeNe” Ward and McDonald tossed in lay-ups off of in-bounds passes that grew the lead to 61-46 with 3:40 on the clock.

Senior Ashanti Lynch tried to rally the Lady Hawks with 5 baskets and 4 free throws in the quarter, but Mitchell tossed in her 8 straight free throws and flipped in a lay-up off of a feed from Burney. The Lady Hawks never got closer than 8 points in the final 3 minutes.

“We didn’t panic,” noted Evers. “We kept our composure, and we were more patient on offense. The girls did what they had to do tonight to get us to the regionals. That was one of our goals that we talked about was getting back to the regionals.”

Ward, Burney and Heustess all finished with 8 points each for the winners. Burney grabbed 5 rebounds and dished out 2 assists. Heustess blocked 3 shots, and Ward had 3 rebounds.

Ashanti Lynch recorded a double-double of her own with 33 points and 14 rebounds. Shamaya Lynch totaled 7 points. The Lady Hawks outrebounded East 37-29, but the Lady Eagle defense forced 23 turnovers. “Our defense was really good tonight,” said Evers. “I am so excited about this team.”

McDonald scored off of an in-bounds pass to start the game then stole the ball twice – racing for a lay-up off the 1st steal then pitching ahead to Burney for a lay-up. Mitchell buried a 3-ball for a 9-4 East Bladen lead, but Ashanti Lynch’s 3-ball evened the count 9-9.

Mitchell swished another 3-ball for a 12-9 lead, McDonald hit a foul shot, and a Ward assist resulted in a Burney lay-up. Ashanti Lynch bulled her way to the basket for a pair of lay-ups that tied the game again – 15-15 at the quarter break.

East Bladen made 8 3-point shots in the game, and Mitchell opened the 2nd period with her 3rd 3-ball of the night. Heustess buried a 3-ball, and McDonald snared a rebound and hurled a long pass to Burney for a lay-up. McDonald then stole the ball and sprinted through the Lady Hawk defense for a lay-up and a 25-15 lead.

Ward bombed in a corner 3-ball for a 28-17 lead. Ashanti Lynch responded with 2 baskets, but Mitchell cashed in 2 free throws, and McDonald scooted end-to-end for a lay-up and a 32-21 lead. Burney and Mitchell tacked on a free throw each, but Jamecia Wooten’s follow shot trimmed the margin to 34-27 at halftime.

A Tajah Pittman 3-point play and Shamaya Lynch’s lay-up pulled North Lenoir to within 35-32, but McDonald converted 3 of 4 foul shots, and Heustess drained a 3-ball to pad the lead to 41-34.

McDonald drove for a lay-up, and Ward burnt the nets with another 3-ball to push the margin to 46-35. Ashanti Lynch popped in 2 free throws and a 15-footer, but Mitchell kept the lead at 48-39 by sinking 2 more foul shots.

North Lenoir completed their season with a 23-5 record.