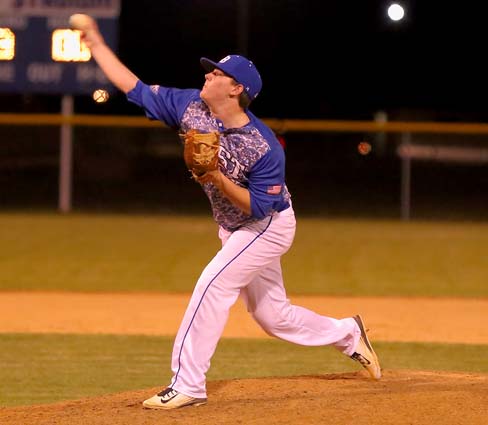 Coates anchored the Eagle pitching staff posting a 10-2 record. His final win of the season came in the title-clinching 6-3 win over Union. At the plate in that game Coates knocked in 2 runs with a pair of hits.

Speedy catcher Kyle Tatum stole 30 bases this season and slugged a game-winning home run at Heide Trask. Tatum picked a potential tying run off third base in the seventh inning to seal a key 6-5 victory over Midway. Tatum also batted 2-3 with an rbi in the Eagles 6-5 play-off loss to Currituck. Tatum was 3-3 with a triple in a key win over Pender.

Sophmore shortstop Sincere Smith had a 9 hits in 9 at-bats streak around Easter and actually reached base on 11 of 12 trips to the plate during the streak. Smith made some spectacular plays at shortstop for East.

Leftfielder Nikita Owens batted clean-up and blasted 2 doubles and drove in 3 runs in the key win over Pender that vaulted the Eagles into first place.

Lennon was the ace in the West Bladen rotation after being sidelined by an ankle injury early in the season. He also led the Knights at the plate.

Hunt filled a number of roles for West Bladen. He filled a spot in the pitching rotation for most of the year, played rightfield and even caught some games when West Bladen lost two catchers to injuries.