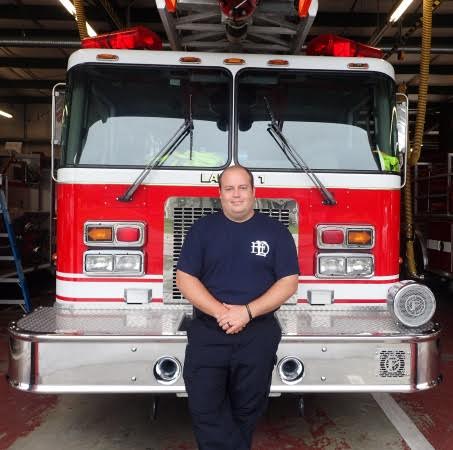 The new recruitment and retention officer at the Elizabethtown Fire Department is Jimmy Mize from Clarkton, NC. The new position is primarily an administrative according the Chief Nick West.

Assisting with volunteers, recruiting new members, developing training programs and assisting with public relations will be Mize’s primary responsibilities according to West.
The new position is part of achieving Elizabethtown Fire Department’s new vision, “Provide safe, efficient, and effective services by being value driven and community focused. It is who we are and what we do.” according to West.

Mize is no stranger to the fire service. He said the interest in firefighting started for him at the tender age of four or five years old. “My mom and dad took me to Charlotte Fire Department when I was around 5. While I was there, the department got a call.” He said his excitement grew from there.

Mize does have goals for his new position in Elizabethtown. “My goal is to recruit more members and have well-trained members.” said Mize. “When a department responds to an emergency call you want to know those responding are well trained.”

“Be the fireman you would want showing up,” Mize said was one thing he learned at the academy. His goal is to have a training in place to insure the firefighters are trained properly. Mize added, “You want someone who is well trained.”

Mize also explained that turnover rates are high in the fire service. “We are trying to come up with a more friendly schedule for training.” said Mize.

The public is invited to stop by and meet Mize at the Elizabethtown Fire Department.

Published in Announcements and Local News