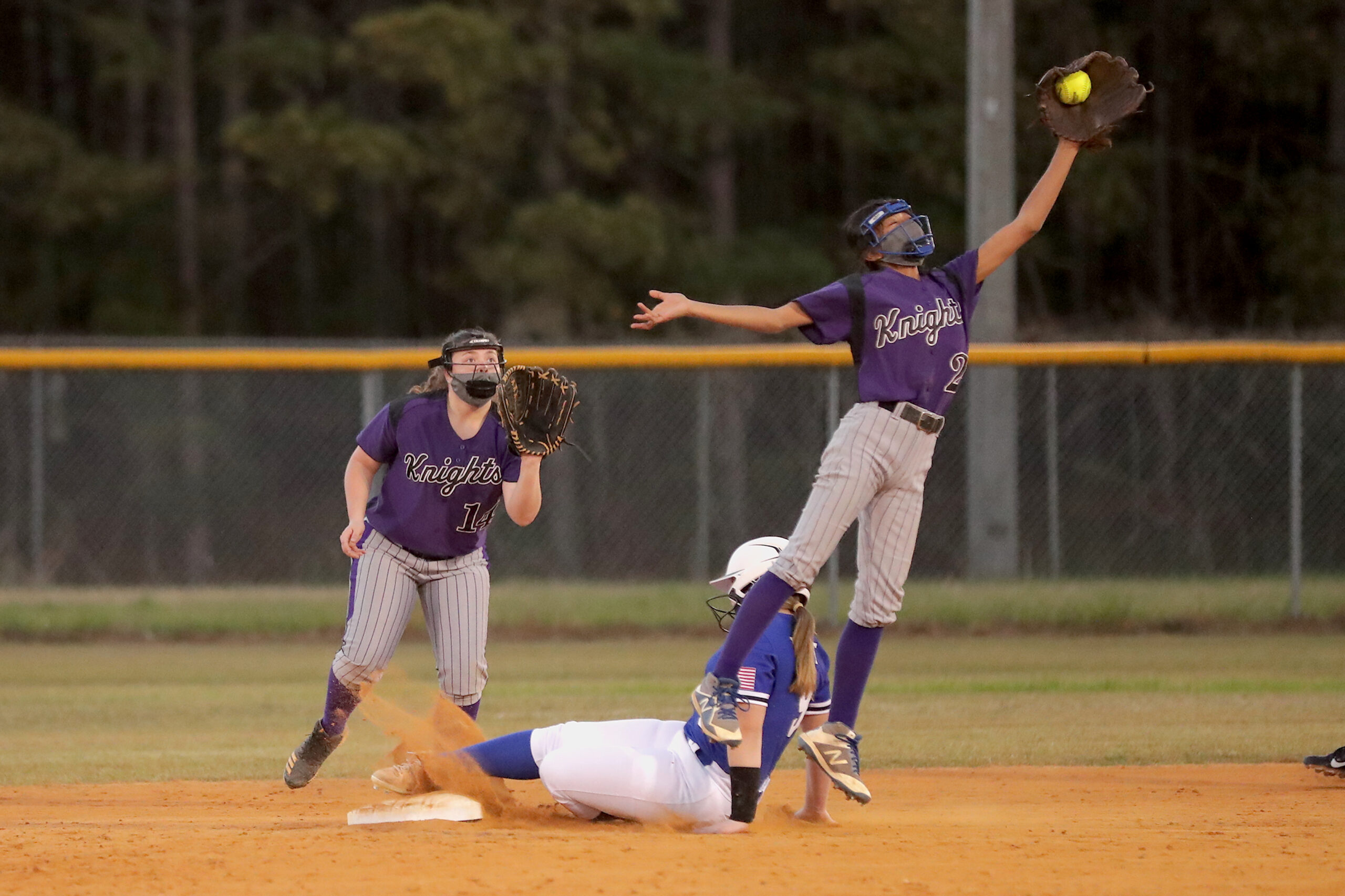 ELIZABETHTOWN – An 11-run, 7th inning proved to be the difference Monday night as West Bladen survived a furious East Bladen rally and outlasted the Lady Eagles 23-13 in non-conference softball action.

East Bladen had sliced a 12-3 Lady Knight lead to 12-9, before the visitors’ 11-run explosion that came after 2 were out. Senior Abigail Madden beat out an infield hit, and sophomore Rylee Chadwick ripped a single to left. An error on the play plated Madden. After a walk to sophomore Madison Taylor, junior Jessalyn Vendrick yanked a single to left that drove in Chadwick.

Junior Hannah Pait and sophomore Mackenzie Singletary reached base on errors as pinch-runners Kaitlyn Brisson and Madison Walters scored. Senior Shelby Pharr slapped a grounder down the 1st base line that eluded the outfielder and cleaned the bases.

Senior Shelby Smith and sophomore Maegan Burney drew walks in the East 7th. Kayleigh Raynor forced Smith at 3rd base, but sophomore Laura Davisson swatted a single to right that scored Burney, and Raynor darted home on an error. Sophomore Emma Turbeville slugged a 2-run home run to leftfield that trimmed the final margin to 23-13.

Madden batted 5-for-6 with a double, a triple, 5 runs scored and 2 runs batted in to lead the West hitters. Chadwick scored 6 runs and drove in 4 runs with a 4-for-5 performance that included a home run and a double. Vendrick turned in a 3-for-4 game with a home run, 3 RBIS and 3 runs scored.

Raynor batted 2-for-4 with 2 runs scored to lead East Bladen. Mariah Smith drove in 2 runs with a 2-for-5 night at the plate. Turbeville slammed the 2-run homer and scored 3 times. Sophomore Karli Priest hammered a double, scored 3 runs and drove in two.

Sophomore AnnaGrey Heustess smacked a double and had an RBI and a run scored. Senior Alyssa Futrell knocked in a run with a double. Davisson cracked an RBI single and scored a run. Burney and senior Carlie West added one hit each. Burney scored twice and had an RBI. Dyiamon Robinson scored an East run.

Chadwick pitched a complete game to pick up the win, allowing 13 runs – 8 earned – on 11 hits and 5 walks while striking out 5.

The Lady Knights grabbed a 3-0 lead in the 1st inning. Madden legged out an infield hit, and Chadwick walked. A throwing error on Taylor’s grounder plated Madden. A Vendrick grounder scored Chadwick, and Pait slapped a single to right that scored Taylor.

Priest led off the Lady Eagle second with a walk, advanced on an error and sprinted home when Heustess clubbed a double to right that trimmed the lead to 3-1.

Chadwick walloped a home run over the left-center field fence to begin the Lady Knight third. West Bladen added 4 runs in the 5th inning. Madden laced a single to left, stole 2nd base and darted home when Chadwick rapped a single to center. A throwing error on the play sent Chadwick to 3rd base, and she scooted home when Taylor laid down a squeeze bunt.

Vendrick crushed a towering home run to left, and Singletary delivered a single to right-center field. Pharr poked a single down the right field line, and Durden drove in courtesy runner Brisson with a single that pushed the lead to 8-1.

Raynor started the Lady Eagle 5th with a single but was forced on Turbeville’s grounder. After a wild pitch, Priest lined a double to left-center field that scored Turbeville. Mariah Smith knocked in Priest with a single to right that whittled the lead to 8-3.

Madden led off the West 6th with a double to right-center field and raced home when Chadwick drilled a double off the left-center field fence. After Vendrick walked, Pait rapped a single to center that scored Chadwick. Vendrick stole home on the back end of a double steal with pinch-runner Lewis, and Lewis scampered home on a passed ball that grew the lead to 12-3.

Futrell and Heustess reached base on errors to begin the East Bladen 6th. West’s fielder’s choice forced Futrell, but Burney smoked a single to center that scored Heustess. Raynor and Turbeville drew walks that forced home Robinson, the pinch-runner for West.

An error on Priest’s grounder plated Burney and Raynor. Smith lined a single to left-center field that scored Turbeville, and Futrell smashed a single to center that scored Priest and sliced the West Bladen lead to 12-9.