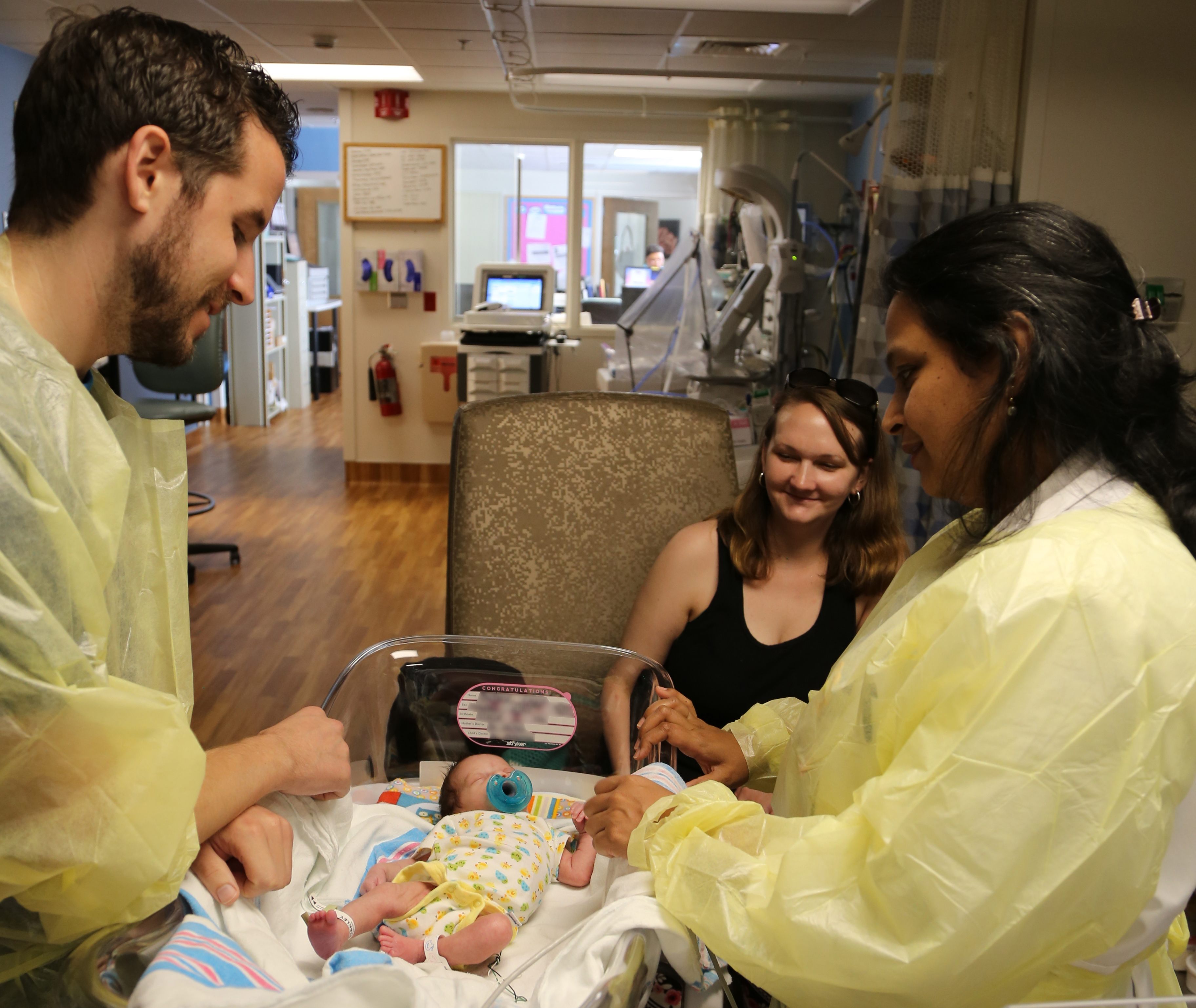 The field of neonatal therapy is relatively new, and Southeastern Health’s Southeastern Regional Medical Center is very proud to have two therapists who can work in the highly specialized environment of the Neonatal Intensive Care Unit (NICU). Since 2016, Occupational Therapist and Inpatient Rehab Services Coordinator Jyutika Zope and Physical Therapist William Hunt have been working with full-term and premature babies at SRMC. Their work is aided by upgrades made in 2017 to the unit, which can care for babies born up to 10 weeks early.

“Not a lot of therapists go into the NICU,” Hunt said. “It requires additional training and mentorship, and because it’s so specialized, it can be hard to find people to mentor you in this area. We conduct evaluations, develop treatment plans, and as they progress to go home, we integrate the family into that plan.”

Kayla White, of Lumberton, is a nurse at SRMC who is also a parent of a child who went through the NICU. Her son, Harrison, who turns 1 this weekend, was born six weeks early but is now thriving.

“What I remember most from our stay in the NICU was how the therapists educated us about proper feeding and handling techniques for a premature baby,” White said. “Harrison was so small, and they made me feel more comfortable and prepared when it was time to take him home.”

Because of advanced-level competency requirements and the continuous examination, evaluation, and modification of procedures during each patient contact, the NICU is a restricted practice area for certain levels of therapists.

“Typically, we see babies at 32 weeks or more gestation, which is about two months preterm,” Zope said. “When they are born preterm, their systems are not geared to take stimulus and process it. They’re so small, so medically fragile, and must be handled very delicately or they could be inadvertently harmed through the examination and intervention procedures. At the same time, they’re being managed medically, and we’re constantly examining how they’re responding to the therapy.”

Adding therapists in the NICU rounds out the efforts of the medical team and the family.

“An infant might be in the NICU for two or three weeks, and parents can’t be there around the clock,” Hunt said. “If they’re preterm, they’re often not able to be with their mothers or even out of the warmer unless it’s with someone who is skilled in watching for signs of distress. We can take the time to do positive interactions with the babies, who need positive touch and non-noxious stimuli, to help balance out the poking and prodding they have to endure for medical reasons.”

The therapists might carefully hold or position a baby in the fetal position, like he would be in the womb, rather than lying flat, to help him develop muscle tone by encouraging the baby to flex and push as he would do normally. The NICU also works to create environmental modifications to closely resemble the womb, like keeping the room warm and dark.

“We’re looking for reflexes and signs of developmental delay,” Zope said. “Babies in the womb have mile marker reflexes they develop, but when they’re born preterm it can be harder for them to develop. We can start intervening early to combat or minimize the deficit or effects caused by their situation. Sometimes it’s not as overt, like a cleft palate, or other times it might be something bigger, like a heart defect. We look at how they respond. Knowing typical neurodevelopment comes into play, as does understanding how several complex systems integrate in development.”

Most of the babies that the therapists see are preterm, while some are also experiencing Neonatal Abstinence Syndrome (NAS). These infants are born addicted to a substance and the therapists use their techniques to help the babies through the withdrawal symptoms.

“NAS babies have nervous systems that are used to being on drugs,” Hunt said. “As they go through withdrawal, you need to intervene in different ways. In addition to medical interventions, we provide deep pressure, infant massage to help calm everything down, to help guide them through that experience.”

NICU Manager Andrea Pratt says she is very appreciative and proud to work with the therapists in her unit.

“As a recently upgraded Level II NICU, the care we provide to our infants and their families has tremendously impacted our community,” Pratt said. “Jyutika and William have come into the NICU with open arms and treated each of our infants with ranging diagnoses as if they are their own. The treatment the infants are receiving from these therapists is helping decrease the length of stay and impacting long-term developmental milestones in a positive way.”

Jyutika Zope, MHA, OTR, CLT, earned a master’s degree in health administration from University of North Carolina at Chapel Hill, and a bachelor’s degree in occupational therapy from University of Mumbai, India. She is also certified in lymphedema therapy and is a member of the National Association of Neonatal Therapists. She has extensive experience in occupational therapy and health care management. She is currently coordinator of inpatient rehab services with Southeastern Health.

In February 2017, SRMC renovated its nursery, which reopened as an upgraded Level II NICU. The facility’s upgrades allowed providers to care for babies born up to 10 weeks early, compared with the previous level which was only able to care for babies born up to six weeks early, with newborns arriving earlier most likely being transferred to other hospitals. The expansion was part of a partnership between SeHealth and Coastal Children’s Services, a group of pediatric subspecialists.