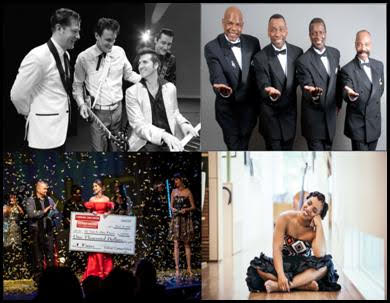 Ticketing Information
Tickets for the Mainstage Series can be purchased on-line by going to the theater’s web site at www.carolinaciviccenter.com.  Tickets also can be purchased in-person or with credit card or cash noon to 5:30 pm Monday through Friday through the administrative offices in the theater’s second floor (enter on Fourth Street side), or by calling the Civic Center at (910) 738-4339. When available, tickets can also be purchased at the door. Theater lobby box office opens for ticket sales one hour prior to performance.

Mainstage Series tickets are $10 – $25 (not including “Special Performances”). A Season Subscription DISCOUNT of 20% off the Individual price is available if you purchase five or more events at the same time through our box office. Senior, Military, PrivilegesPlus, student discounts and Group Rates are also available for most events.

As one of the pioneers of Motown, singer-songwriter and producer Marvin Gaye helped shape the sound of R&B music and is considered one of the greatest artists of all time. Soul man Brian Owens is often referred to as the “second coming of Marvin Gaye.”  Owens, who has performed at the White House for First Lady Michelle Obama, dazzles audiences with performances that are full of soul and love well beyond his peers of today. His refined style combining classic soul with a slight modern touch is why audiences everywhere are calling him the new voice of American soul.

What’s Going On: The Marvin Gaye Experience is Brian’s tribute to the legendary artist and includes music selections that span Gaye’s music-making career. Early solo hits like “Can I Get a Witness” and “I Heard It Through the Grapevine” share space with “You’re All I Need to Get By” and other classic duets. And any Marvin Gaye song list would be incomplete without perennial (and challenging) crowd-pleasers like “Let’s Get It On” or “Got To Give It Up.”

At its heart, Brian’s Marvin Gaye Experience is about “preservation — upholding the tradition of true soul music that is so desperately needed in our culture today.” The show prominently features a suite of pieces from Gaye’s “What’s Going On” album, counted as “one of the most socially important artistic works in the history of American music.” In light of recent events in and around Ferguson Missouri where he resides, Brian says the show also speaks to a heightened sense of urgency and the prophetic beauty of Gaye’s 1971 work.

“ONE NIGHT IN MEMPHIS: Presley, Perkins, Lewis & Cash” is a night of rockabilly, country, gospel and pure 1950s rock and roll. A high energy concert that takes you back to December 4, 1956, the night when four of the biggest names in early rock and roll — Elvis Presley, Carl Perkins, Jerry Lee Lewis and Johnny Cash – gathered together for an impromptu jam session at the legendary Sun Studios in Memphis.

This tribute to that memorable night in Memphis when Elvis, Johnny Cash, Carl Perkins and Jerry Lee Lewis recorded at Sam Phillips’ Sun Studios features nationally acclaimed cast members who have an uncanny sound, look and feel of the original legends; the production also features an authentic and energetic rockabilly backup band.  Your audience will feel as though they are witness to a rock and roll royalty jam session with the legendary performers whose music has stood the test of time.

Captivating audiences nationally for the past eighteen years, Summer Brooke & the Mountain Faith Band offer a musical experience that sets them apart from other musicians.  With their unique blend of Country, Pop, Bluegrass and Americana, they became a household name on Season 10 of America’s Got Talent, gaining the attention of millions and earning their spot as semifinalists.  Their ability to manipulate popular songs and add their own personal style immediately captivated audiences both in studio and throughout homes in America, appealing to lovers of all genres of music. Howie Mandell of AGT said, “This IS America’s music.”

Accolades and honors for the band since their debut on AGT include traveling to Doha, Qatar to play for the military, multiple appearances on the Grand Ole Opry, Pre-game show concert for Super Bowl LI at NRG Arena in Houston, TX, National Anthems for The Falcons, Panthers, 49ers, Braves and NASCAR all-star truck races, and many festivals, fairs, performing arts centers and colleges.  Rounding out their resume, they have had the privilege of sharing the stage with legends such as Loretta Lynn, Charlie Daniels, Willie Nelson, Marty Stuart, and Dailey & Vincent.

Tickets are $15 adults and $10 students.  This performance is partially underwritten by a grant from the Robeson County Arts Council.

Our annual heart-warming holiday musical revue for the entire family featuring the best regional performers singing and dancing in the holidays. This year’s show features Lumberton’s own former Miss North Carolina Rebekah Revels Lowry, X-Factor Top 40 selection Brent Tyler, and Jef the Mime.  See the beautifully staged dancing of “The Civettes” as well as adorable performances by the show’s youth cast.  The theater will be beautifully decorated for Christmas and, of course, there will be appearances by Frosty the Snowman, The Grinch and Santa Claus!  This year marks the Carolina Civic Center Historic Theater’s eighth edition of what has become the region’s “go to” Christmas show.

Tickets: Individuals $25, Seniors (65+) and Military $22. Students $10, Rear Balcony $17*,PrivilegesPlus members $20. Group discount rates of $20 each for groups of 10 or more when purchased in advance are available by contacting the box office.  *For this show only, the seats in the back half of the balcony may have an obstructed view.

Up on the Roof.  Under the Boardwalk.  This Magic Moment. There Goes My Baby.  Dance with Me.  Spanish Harlem.  Stand by Me.  The list of hits goes on and on. THE DRIFTERS…one of Rock & Roll’s founding vocal groups is once again touring the U.S. under the auspices of their original management team.

From their inception in the early 1950’s and up until recently, THE DRIFTERS has a symbiotic relationship with Rock & Roll legend George Treadwell, who has discovered and managed such famous artists as Dinah Washington, Sarah Vaughn and Nina Simone.  The Treadwell Family was there when the original DRIFTERS formed and was responsible for guiding their career through 20 years of uninterrupted hits that has made them the second most successful recording artist of all time, according to Billboard Magazine.

The Drifters were originally formed in the 1950’s (60 years ago).  From the start, the term “Drifters” was used to denote performers who “drifted” in and out of the group.  All of the original members are long deceased and, in fact, the last original member departed the group over 40 years ago.  Robert Wiggins, our longest current member, has been with the group 30 years and worked with 3 original members.  While the Drifters were among the first group of artists to be inducted into the Rock & Roll Hall of Fame, several of their members who left the group and went on to have solo careers (like Ben E. King and Clyde McPhatter) were also inducted for their individual efforts.

Our hugely popular –and very competitive- talent competition.  Includes all categories of talent – from singing and dancing to instrumental and more.  Auditions will be held to determine who gets to showcase on our stage, with cash and gift prizes going to the top contestants and a grand prize of $1,000. It’s more than a competition; it’s a great show!

With a deep respect for lyrical storytelling, cellist/singer-songwriter SHANA TUCKER delivers a unique voice through her self-described genre of ChamberSoul™.  Shana’s melodies weave strong hints of jazz, classical, soulful folk, acoustic pop and a touch of R&B into a distinctive rhythmic tapestry.

Touted by JazzTimes Magazine as a jazz talent “…whose imprint and vitality has already been quite visible…” Shana’s style and sound as been described as a blend of Dianne Reeves, Joni Mitchell, and Tracy Chapman, with an efficient complexity that is reminiscent of Bill Withers. ChamberSoul™ best describes what the listener should expect when experiencing Shana’s music. “I’m intrinsically drawn to “real” instruments, with resonance, tone and depth that can sound without amplification. Whenever and however possible, I always try to set a tone of acoustic intimacy with my colleagues on stage, and also with the audience, so that the music, performers and audience feel close and tangible, no matter the size the venue.”

Tickets $15 adults and $10 students. .  This performance is partially underwritten by a grant from the Robeson County Arts Council.

Directed by the theater’s resident artist, Kendrix Singletary. When a tornado rips through Kansas, Dorothy and her dog, Toto, are whisked away in their house to the magical land of Oz. They follow the Yellow Brick Road toward the Emerald City to meet the Wizard, and en route they meet a Scarecrow that needs a brain, a Tin Man missing a heart, and a Cowardly Lion who wants courage. The wizard asks the group to bring him the broom of the Wicked Witch of the West to earn his help.

Tickets: Individuals $25, Seniors (65+) and Military $22. Students $10, PrivilegesPlus members $20. Group discount rates of $20 each for groups of 10 or more when purchased in advance are available by contacting the box office.  Season Tickets:  Purchase 5 or more events at the same time through our box office to receive a 20% discount off the top ticket price.