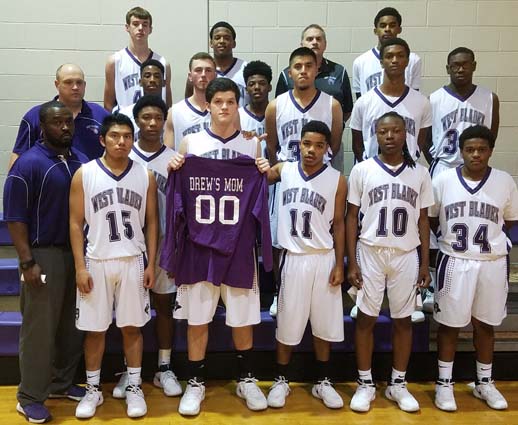 12/28/2017
Spread the love
West Bladen’s Knights have a great record in their own Christmas Tournament and have won several Woodmen Life Christmas Championships, but Wednesday night the team won a game for a member of their family.

“Tonight it was about winning for Drew’s mom,” said Coach Travis Pait after the Knights’ 64-59 win over Dillon, SC. “This team has been through so much this season with about five players having family members either really sick or passing away, but tonight it was all for her.”

Sebrina Grimes, the mother of West Bladen center Drew Harris, had bought a purple shirt recently with ‘Drew’s Mom’ and his number ’00’ spelled out on the back of it. She had only wore it one time to the last home game before Christmas, before she passed away on Christmas Eve.

“She enjoyed watching the team, win or lose,” said Drew’s dad Tom Harris. “She also liked to proudly yell out, ‘That’s my boy!’ when Drew scored, rebounded, or blocked a shot.”

The team is pictured after Wednesday’s big win over Dillon. Drew is holding his mom’s shirt.