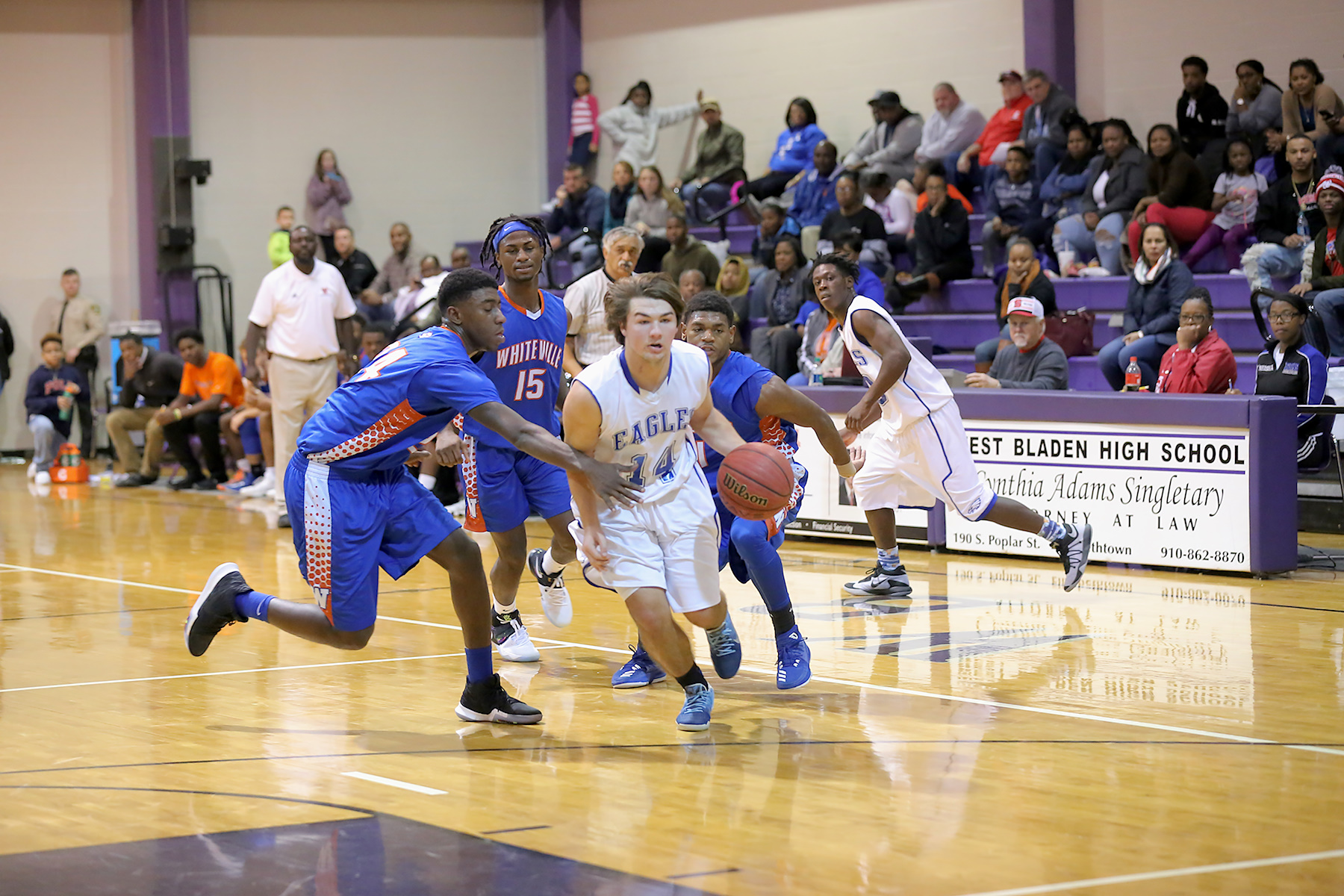 It was the first win of the season for the Eagles who survived a 21-7 Whiteville surge that tied the game 44-44 with 3:42 remaining then answered with a 17-2 run of their own.

“It was a long time coming,” said East Bladen Coach Kenzil McCall. “It was the first time this season that we have had the lead late, and we had to learn how to handle it.”

Avery hooked in a lay-up to put the Eagles up 37-23 with 2:07 left in the third period, before Ervin Moore dropped in a trio of lay-ups to ignite the Wolfpack rally.

Cameron Richardson powered in a pair of inside buckets, before Bradley Pridgen tossed in a runner to pull Whiteville even at 44.

With Whiteville fouling to stop the clock, Avery hit 2 of 4 free throws, and junior Pierce Melvin sank four in a row. Smith muscled in a follow shot on Avery’s second miss to put East Bladen up 61-46 with 38 seconds remaining and seal the verdict.

Smith posted a double-double of 21 points and 13 rebounds, and Avery followed with 18 points and 8 rebounds. “Skippy (Smith) had a monster game, “ said Coach McCall. “Adonis’ shot started falling, and he hit a couple of big 3’s for us.”

After Richardson scored the game’s first basket, the Eagles reeled off ten straight points. Leach drove for a lay-up, Avery drilled a 3-point shot, and freshman Javant McDowell turned a Smith feed into a lay-up.

Pridgen’s 3-ball narrowed the gap to 15-11, but Davis converted a steal into a lay-up, and Avery popped in a baseline jumper for a 19-11 East lead at the quarter break.

Davis sprinted end-to-end for a lay-up to keep the lead at 21-13. Smith drained a 3-point shot, turned a Melvin assist into a lay-up and made a free throw for a 27-17 East lead at halftime.

Avery put back a rebound then sent a pass to Leach for a lay-up. Smith raced end-to-end for a lay-up, and Davis flew down the lane for a lay-up and a 35-21 Eagle lead with 3:04 left in the third period.

“I told our guys this is the kind of energy that we need to bring every night,” said Coach McCall. “We have got to play hard every game.”

Richardson led the Wolfpack scoring with 14 points, and Moore followed with 9 points.