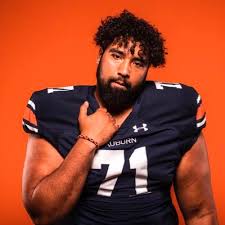 Former West Bladen star Brandon Council who plays right guard for the Tigers was helped from the field after suffering a leg injury with 5:12 left in the game. Council was engaged in a block when two players rolled up on his left leg from behind.

After the play, SEC Network announcer Jordan Rodgers said, “Council has been All-Everything for that offensive line,” while his play-by-play partner, Tom Hart, added, “He is the most versatile player on the offensive line for Auburn.”

After the game Auburn Coach Gus Malzahn said, “It didn’t look very good with him coming off the field, so hopefully it’s not that bad. He (Brandon) has been so instrumental with the guys up front to give us flexibility with the positions he plays, so we’re hopeful that’s not anything serious.”

During Council’s time on the field the Tiger offense racked up 226 yards rushing and 156 passing. Hart credited him “with a beautiful pull and clear” block on Shaun Shivers 12-yard run to the Rebel 19 yard line on Auburn’s first touchdown drive. Tank Bigsby bolted 4 yards for that touchdown behind another Council block.

Nix passed for 238 yards and the one touchdown to Williams who had 8 catches for 150 yards to lead the Tiger receivers. Bigsby rushed for 132 yards and 2 touchdowns, while Shivers carried for 66 yards and another TD.

The Tigers improved to 3-2 with the victory and will host defending national champion Louisiana State Saturday at 3:30 EDT.