Board of Elections meets, deals with absentee ballots 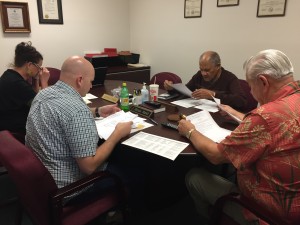 The Bladen County Board of Elections met on Tuesday afternoon and approved 72 absentee ballots. Originally, 73 ballots were returned since the last meeting but one was incomplete and needed additional information.

Board of Elections Director Cynthia Shaw also updated the board on several matters. The first matter involves House Bill 2.

“They (the State Board of Elections) are telling us that it appears we’re going to have a June 7 election because of Congressional redistricting,” said Shaw.

House Bill 2 sets the congressional primary for June 7 and a refiling period to begin on March 16.  Board of Elections Chairman Bobby Ludlum added that the schedule will depend on the final ruling of a federal judge which is not expected until March 18.

Shaw also updated the board on the election night instructions from the State Board of Elections. She told the board that they cannot release any information regarding the US House results. Shaw said that is the same procedure issued to all 100 counties.

Shaw also updated the board on the latest election calendar that was sent to her office.

Shaw told the board that the One Stop voting machines will be delivered to the voting sites on Wednesday and Evans Computers is working to get all the sites online.

Shaw said that she has also received a memo from the State Board of Elections saying that a group called Democracy North Carolina will be on hand at the polling sites outside the buffer zone conducting exit interviews with voters. She said they will be dressed in yellow shirts.

She also told the board that Edison Research said they will not be hiring anyone to work polls.