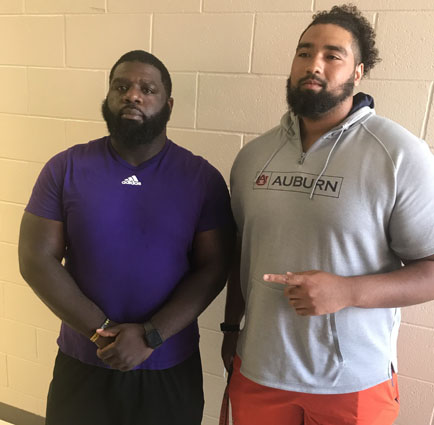 BLADENBORO – Former West Bladen star and current Auburn Tiger Brandon Council opened the Knights’ 1st football practice of the season Monday morning by emphasizing to the current Knights that grades and hard work are key to success at the next level.

Council (pictured above on right with Coach Stanley Williams) stated, “Grades are the key. “When I was here, I had offers from East Carolina, N. C. State and others, but my grades weren’t good enough. I went to prep school (Jireh Prep), and after a year I was able to get into Akron, a small Division 1 school.”

After earning a degree in sports administration and a minor in marketing while starting on the offensive line for the Akron Zips, Council transferred to Auburn and started every game for the Southeastern Conference power last year until an ACL injury ended his season.

“College opens opportunities for you,” continued Council. “I thought I was going to BCC (Bladen Community College) to take welding. Don’t be satisfied with your current situation.”

“You set your foundation here,” added Council. “You have to work everyday and not just at practice. I used to run on Hwy 87. The work ethic starts in high school, and don’t think you are too small. We have a 5-5 running back at Auburn.”

Council also pointed out the importance of teamwork. “Football is a brotherhood, a fraternity, a family. You have to have each others back.”

The Knights had 45 players at Monday’s practice according to Coach Stanley Williams who said “I was expecting 50, but the kids that showed up today have bought in and have worked hard all off-season.”