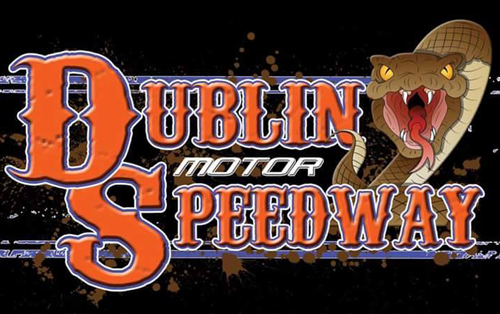 Chris Ferguson kept charging toward the front in Saturday night’s Rattlesnake Rumble at Dublin Motor Speedway, hoping to give his mother the ultimate birthday present.

Meanwhile, G.R. Smith, comfortably ahead from the start, began to slow his pace. When Smith clipped the inside wall while trying to pass a slower car with six laps remaining, it was the opening that Ferguson needed.

Ferguson took the lead between turns three and four and went on to win the $5,000 top prize in the Ultimate Super Late Model Series event by 0.735 seconds over Smith. Willie Milliken was third in the 50-lap event followed by Dennis “Rambo” Franklin and series points leader Kenny Collins. Doug Sanders was the only other driver to finish on the lead lap.

“I’ve got to give a hats off to this track and the crew because there was a top side tonight, and any time we can come to a track and race like that for the lead it’s just awesome. My car was flawless. I couldn’t quite run the same line as them down low, so I had to make something else happen. I can’t thank my crew enough.”

Ferguson’s win came on his mother’s birthday. Allison Ferguson said she was “celebrating the anniversary of my 29th birthday.”

“(Chris) sent me a text message yesterday. He said, ‘Mom, we’re going to win this race for you.’ I said, ‘Well, son, just do the best you can and that will be good enough, but a win would be an extra bonus.’

Allison Ferguson had to watch her son overcome a spinout on lap eight of the 50-lap race and continually power around the 4/10ths-mile dirt track on the high side before finally taking the lead.

“I never count him out,” Allison Ferguson said. “He proved me wrong one time when he had to come from the rear and won a race.”

For Smith, it was an opportunity lost after being the fastest in qualifying and leading the first 43 laps.

“I was worried about my tires,” Smith said. “I saw the track getting black. I just took it too easy. I was in conservation mode and I had plenty of tire left. I should have picked it up. When I clipped the inside wall that ruined our chances of getting back. We could have made it a fun race. (Chris) earned it, but I feel like I could have put up more of play.”

Smith and Ferguson started on the front row, but, on the drop of the green flag, Milliken, who was starting on the inside of the second row, beat Ferguson out of the second turn.

A three-car wreck along the front stretch on lap 2 took out Dean Bowen, Zack Mitchell and Glenn Elliott. None of the drivers were injured.

The Ultimate Super Late Model Series will return to Dublin for a two-day event Oct. 7-8.

Dublin Motor Speedway will not have races during the July 4th weekend. The track’s next race sis cheduled for July 9.