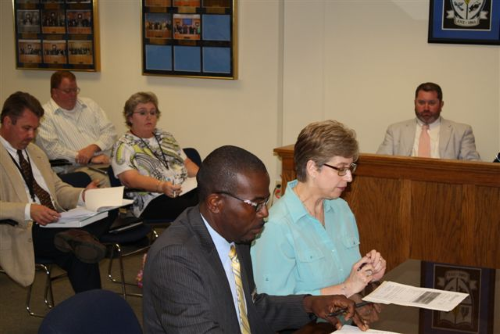 Commissioners Deny Board of Ed request to transfer funds

Bladen County Commissioners denied a request from the local Board of Education to transfer capital outlay funds to current operating expense Monday evening.
According to Dr. Robert Taylor, Bladen County School Superintendent, the transfer of funds will be necessary for the school system to close out the current school year.  Taylor requested up to $495,000 be transferred.  He estimated it would take $350,000 to pay bills for personnel, utilities and other expenses for the final two months of the school year.  He asked for the additional amount so he would not have to return if more funds were needed prior to the end of the school year.  He promised commissioners he would not request additional funds in the future, that he had heard them say the school system must live within their budget.
After his request, Chairman Charles Ray Peterson asked for a motion and there was silence.  He told Dr. Taylor his request had been denied.  Taylor explained that the bills needed to be paid and again promised it would be his last request for more money.  Again, Peterson called for a motion and again silence.  Peterson stated that the request had been denied.
Prior to that exchange, Dr. Taylor requested funds to repair a roof at Plainview Primary School.  He was questioned about repairing a roof on a building that would likely be vacated in the near future.  Dr. Taylor said the school would be used next year and the repairs were needed.  “The roof is leaking,” he said.  The funds are from lottery proceeds that come to the local school system from the state.  His request was granted. 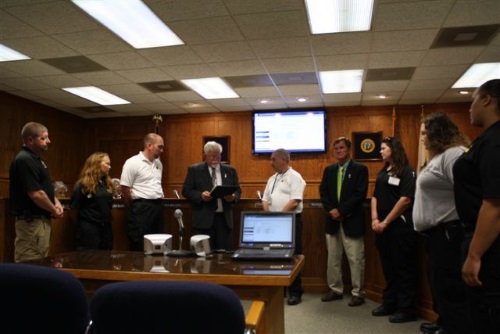 The board adopted an Emergency Medical Services Week Proclamation and presented it to EMS Director David Howell.  Howell was accompanied by representatives of the Bladen County EMS, Clarkton, Bladenboro, Tar Heel and Elizabethtown rescue squad members. 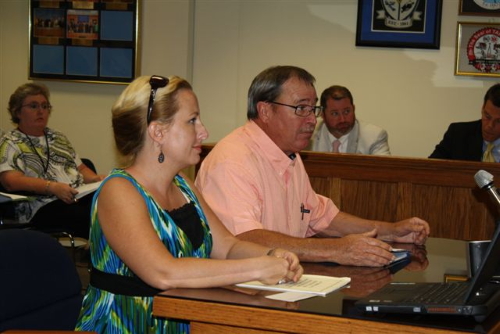 The Bladen County Animal Control Advisory Board had two requests related to governance.  Peterson told the members of the board who were present that commissioners could approve one of their request, however the second would require a Public Hearing and that would be scheduled for the next commissioners meeting.  The two requests had to do with the number of members on the board and about hiring a vet from outside the county (the Animal Control Board has been unsuccessful in locating a vet in the county that could provide the service) 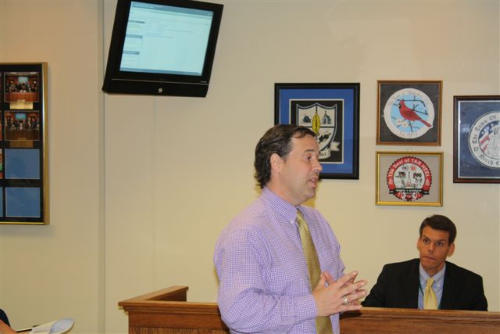 Commissioners held a Public Hearing to receive comments regarding a Bladen-Columbus Regional Hazard Mitigation Plan.  A consultant from Holland Consulting Planner explained the process.  The State of NC and FEMA provide the funds for the planning process.  He explained that over the years, the state has condensed the number of plans from 165 to 38, statewide.  The 5 year plan will be reviewed annually.  Commissioners approved the plan after no comments were received during the Public Hearing.
Lisa Coleman, Bladen County Finance Officer, provided a Financial Dashboard, a quick update of revenues and expenditures for the county.  (more later)
She also explained that the commissioners needed to formally approve the Audit Contract for the year ending June 30, 2015 and due on October 31, 2015.  The Board approved an Engagement Letter with Thompson, Price, Scott, Adams and Company, PA.  The county will seek bids for future years in the spring of 2016.
Chis Harrelson, Director of Health and Human Services, had several items of business the board acted on, including a contract with Bladen County Health Care, LLC d/b/s Cape Fear Valley Hospital.
He requested a transfer of funds in the Young Families Connect program, a grant program, to provide additional transportation expenses.  Both requests were approved.
He updated the commissioners on a recent Eastern District of NC Public Health Association Conference.  Bladen County Health Department received a plaque from the Association for their efforts on behalf of the Women’s and Children’s Health Services and Support program.  The plaque noted the local program was creative, innovative, efficient and effective. 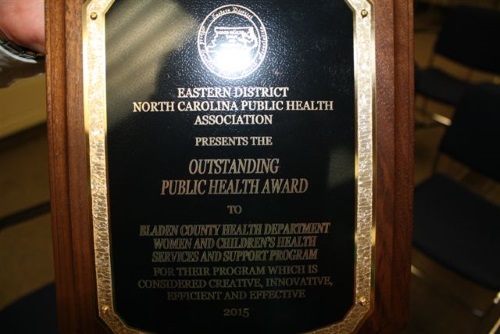 Harrelson also announced that the local agency had received re-accreditation.
Commissioners scheduled several meetings that will involve their time as a Board of Equalization and Review or spend time working on the budget for the coming fiscal year.
Share on Social Media using short code: https://bladenonline.com/?p=13815
Share: