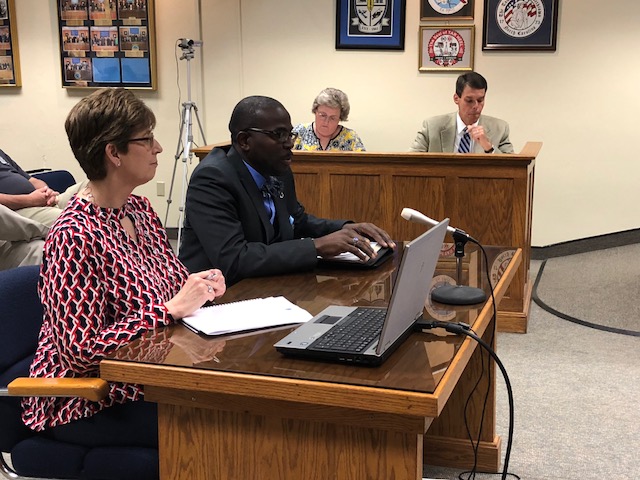 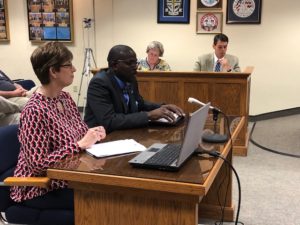 Dr. Taylor acknowledged receiving a budget letter from the county. He also stated the Board of Education staff are going through the school system budget and refining it. Dr. Taylor did tell the Commissioners that seven teachers will be rifted this year. He blamed the enrollment numbers and the new K-3 class size legislation adopted by the General Assembly. Dr. Taylor also emphasized that none of the teachers or staff from Booker T. Washington School were rifted.

Dr. Taylor explained the new legislation mandates that class sizes for K-3 cannot go beyond 20 students in the classroom. He told the board this new requirement has impacted the cost savings the Board of Education anticipated from the closing of Booker T. Washington School.

He said the closing of Booker T. Washington did generate some savings and the reassignment of students to East Arcadia School generated a savings of four teaching positions. Dr. Taylor did say that all of the staff and teachers at Booker T. Washington School have been reassigned to other county schools and one has accepted a position outside of Bladen County.

“We know that we will still be short of where we were in the budget that we gave you. So based on the money the Commissioners have sent to us in the budget letter, what it is we are funded this year, we wouldn’t be able to take out approximately $700,000 from our fund balance,” said Dr. Taylor.

Bladen County Board of Commissioners Chairman Ray Britt asked Dr. Taylor about a reduction in force. Dr. Taylor replied the district will lose some positions this year. Currently, the net loss is expected to be seven certified teachers.

Penny told the Commissioners the Board of Education has not yet received their allotment from the NC Department of Public Instruction (DPI) however she anticipates losing seven teaching positions. she told the Commissioners the Early College personnel will be paid out of the Early College funds the county has received. It was also noted that some teachers and staff members are anticipated to retire and some of those positions will not be filled.

When asked about the status of school consolidation, Dr. Taylor said there was a plan to consolidate schools and build two new schools. He added some things have changed over the past few years since that plan was discussed. He cited the class size mandate for K-3 as one of the items which changed.  He emphasized that if a school district does not conform to the class size mandate for K-3, the General Assembly had warned they would take away the Superintendent’s salary allotment.

He told the Commissioners that the Board of Education expects to lose another 183 students to Charter schools next year. The loss of students affects the dollar amount of the State allotment the district receives.

Dr. Taylor also told the Commissioners the Board of Education received resistance when a consolidation plan was discussed. He also said it will cost the district $28 million to construct one K-8 school.

Bladen County Commissioner Chairman Ray Britt told Dr. Taylor during the session that the Commissioners have been talking to their Representatives in Raleigh regarding the construction of new schools. Chairman Britt said the discussion has centered around school districts being allowed to build new buildings using the same construction guidelines as Charter Schools.

Commissioner Michael Cogdell asked why consolidation is no longer being considered and Dr. Taylor replied it was due to the considerable amount of pushback the Board of Education received from the public.

Dr. Taylor did explained that currently, consolidation plans call for the closing of Booker T. Washington and the reassignment of students and staff. This is scheduled to take place in 2018-19 academic year. The second phase calls for the construction of a new K-8 school in the Tar Heel area. The construction is contingent on the availability of funding.

Commissioner Charles Ray Peterson pointed out that the salary for Central Office staff is $1.3 million for both salary and benefits.

Commissioner Peterson said, “The County can’t afford to piggy back off of the tax payers. There is no trust between this board and your board. Keeping Booker T. Washington open for a training facility, I don’t agree.”

In other business, Bladen County Sheriff’s Office Captain Jeff Singletary and Bladen County Emergency Management Director Bradley Kinlaw addressed the Commissioners regarding a request for an IT position.

Kinlaw explained the request was made because the county was having issues with the radio and pagers. He said there were issues with the system that led to pages being missed and communications sounding garbled. Those have since been addressed.

Singletary said the county radio system needs to have maintenance perfumed at least once per year. He explained there are six tower locations in Bladen County that need to be inspected and serviced on a routine basis.

The board took not action on the matter.

It was also pointed out that State laws have changed and EMS ambulances are now required to have power stretchers. The new law will take effect on July 1, said Kinlaw.

The budget already carried a request for two stretchers but the cost will now increase by $5,000.

Tags: Commissioners hear from Board of Education on budget needs