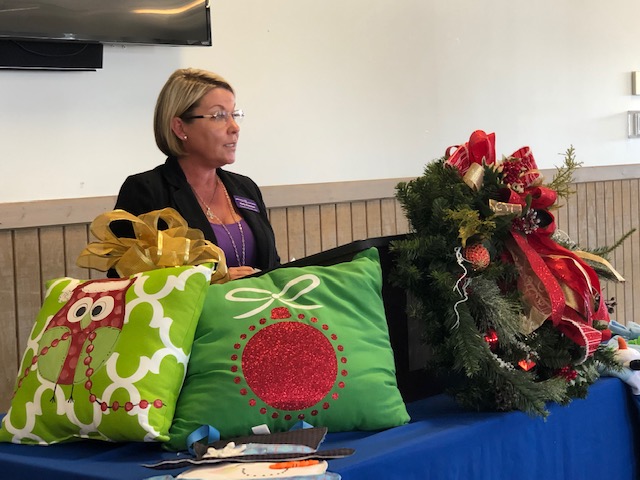 The Elizabethtown-White Lake Area Chamber of Commerce met for their December luncheon on Tuesday afternoon at the Cape Fear Farmer’s Market in Elizabethtown. Bladen County Division on Aging Director Kelly Robeson discussed the Dementia Friendly Initiative and how businesses in Bladen County can join.

“Dementia Friends USA is an initiative that started in the UK (United Kingdom) in 2013. What it is, is a community initiative where people learn how to interact with not only people who have Alzheimers and dementia, but also how to be helpful to a caregiver,” said Robeson.

Robeson explained that, as business owners, it is important to understand what dementia is and how to work with clients who may be suffering from dementia. Robeson discussed the five key messages of dementia which are:

*Dementia is not a natural part of aging.

*Dementia is caused by diseases of the brain.

*It is not just about losing your memory.

*It is possible to live well with dementia.

*There is more to the person than the dementia.

“One main thing I would like to say is people are struggling with this disease,” said Robeson.

She also told the group that a lot of people are developing dementia at younger ages, now.

Robeson said that one of the things Dementia Friends Initiative offers is an opportunity for business owners to receive training on dementia. Once the business owner and their staff complete the class, they receive a Dementia Friendly appliqué to display in their office denoting they are dementia friendly site.

The next Dementia Friends training session is scheduled for Tuesday, December 18th, from 3 until 4 p.m. at the Bladen County Division on Aging located at 608 McLeod Street in Elizabethtown. To register for the training session, call 910-872-6330.

Executive Director Dawn Maynard told the group about a contest that was conducted among the Chamber’s Board of Directors to reach out to the businesses in the community who are former members as well as new businesses who have not yet joined the Chamber. The contest was to see which Board of Directors members could get the greatest number of businesses to join. The prize was presented to Susan Inman.

There was a drawing for door prizes including Christmas stockings, door hangers, table decorations and a door wreath which were donated by Chamber member Whimsical Florist.