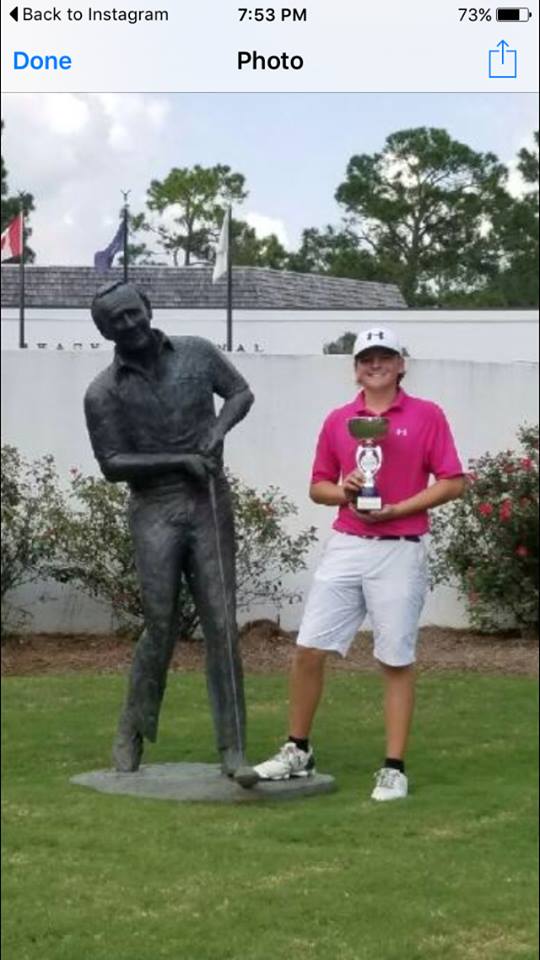 An International field travelled to South Carolina finding soggy conditions that made the course long and difficult. The Greg Norman Academy of Myrtle Beach along with The Junior Players Academy out of Hilton Head brought to bus loads of some of the best young talent in the world to compete over the weekend.

On day one Hancock found himself paired with a local player Holden Grigg from Myrtle Beach. Griggs is a talented young player that sports an impressive resume in junior golf to say the least. Hancock has played with and against Grigg from the beginning of his career.

Cade felt this was a good pairing because he knew is fellow competitor and was comfortable playing with someone he knew. This boosted his expectations to make a good showing, plus gave him a shot at beating his friendly competition.

Hancock and Grigg started on the back nine. Both boys parred the first two holes, but Hancock took a one shot lead after punching an errant tee shot out of the trees and finding the back of the green and then rolling in a 20 footer for birdie. The fourth hole was a 170 yard uphill par three.

Hancock missed the green short but chipped up and rolled in his putt to save par. Grig faltered with a bogey putting himself two strokes down to Hancock through four holes. Hancock parred the next five holes to give him a one under 35 on his first nine holes. Griggs picked up another bogey on the six hole giving him a respectable three over 38, giving Hancock a three shot lead over his playing partner after nine.

At this point Hancock had no idea what the rest of the field was doing. After making the turn Hancock got off to a great start birdieing his tenth hole by hitting the par five in regulation and then draining a seventeen foot putt. The young hopeful found himself at two under par after parring the eleventh. An unfortunate bogey on twelve when Hancock lipped out his putt to save par, took him back to one under.

Three pars on the next three holes,  thirteen, fourteen and fifteen were followed up with another birdie on sixteen after Hancock threw a dart with his wedge to tap in range to get back to two under. He finished solid with pars on seventeen and eighteen. Hancock carded a two under 70 beating his playing partner who shot 73 by three strokes. Hancock was hopeful to have the lead after the first round, but when the rest of the field  scores hit were posted on the leaderboard a young man from Spain had shot a stellar round of 68 putting Cade two shots out of the lead after the first day.

On day two the pairings were regrouped and Hancock found himself  in second place and was paired with two players from Spain who were both pupils of The Greg Norman Academy of Golf. The three top finishers after the first round would battle it out playing together on day two. On the first nine Hancock carded four pars two bogies and three birdies, giving him a one under 35.  The leader shot a two over 38  and the third place man shot 37. After nine holes Cade had erased the deficit and had actually taken a one shot lead on the first day leader and extended his lead on the third place competitor by three strokes. After making the turn Hancock faltered a bit with a bogey on ten and a rare three putt on eleven for two bogies in a row. Pars from his playing partners tightened the match to a one up lead for Hancock.

The defending champion righted the ship by carding seven straight pars to finishing his second nine with a two over 38. Hancock finished day two at a one over 73. The leader after day one shot a 38 on his second nine for a  second day total of 76.  Hancock edged him out by one shot after two days of play. However the third place man  (Carlos) got hot and came from behind on his back nine shooting a one under 35 to go with his 37 from the front nine for a even par 72, one better than Hancock. So at this point Hancock had posted a two day total of 143 to tie with his playing partner from Spain, Carlos who shot 71 on day one and 72 on day two, for a two day total at 143 as well.

According to tournament rules a sudden death playoff would determine the winner. The playoff would begin on the par five tenth. Hancock busted his drive down the right side catching the fairway. The Spaniard hit a good drive too but fell left catching the edge of the rough. Hancock made an aggressive play pulling his three wood out of the bag to go for the green in two. After the round Hancock said, “He wanted to go for it so he could hopefully end it on the first playoff hole.”

The young gun from Spain laid up to  a good yardage and then hit his third shot to about six feet, giving him an excellent look at birdie. Hancock’s aggressive second shot flared a bit left and came up just short of the green side bunker.  Hancock had a good angle and he would need it after his competitor had hit a great chip shot on his third. Hancock rose to the occasion chipping his third to twelve feet, giving him a good chance at birdie as well.  A large gallery had followed the twosome out to watch the play-off. When Hancock rolled in his twelve footer for birdie on the first play-off hole a loud round of applause went up from the gallery. Unshaken the Spaniard  followed suit by sinking his birdie and earning his own round of applause as well. The two competitors moved on to the second play-off hole, a 421 yard uphill par four. Both golfers rocked two solid drives right down the middle of the fairway.

Hancock’s second shot was pulled a little left  but got all the way to the back of the green where the flag was. His ball came to rest about thirty feet from the cup just on the fringe. Carlos the young man from Spain hit an excellent shot just below the hole  to about twelve feet, giving him an excellent look for another birdie. Hancock played first seeing how he was away. He bumped a low running chip that trickled down and clipped the edge of the hole, coming to rest about two and a half feet away to save his par. He stood in and sunk the putt. Carlos now had a chance to seal the victory with a make but ran his putt by about a foot and a half, in which he easily tapped  in for par.

The tension was building as the competitors approached the third play-off hole. Carlos ripped a drive that found the left trees. This swayed the advantage back in Hancock’s favor. Hancock didn’t succumb to the pressure hitting one of his best tee balls of the day. When the ball finally landed it was in the center of the fairway about 110 yards away form the green. The momentum had definitely swayed in Hancock’s favor. Carlos tried to pull off a miracle shot from the left trees and his attempt almost proved to be miraculous. However the ball barely clipped a limb knocking it down short of the green in some deep rough. Once again Cade had a golden opportunity to slam the door shut and secure the victory.  Hancock stood in and hit a beautiful wedge just left of the pin to about ten feet, giving him a great look at birdie. His competitor needed to chip his third shot in for birdie or put it close in hopes of saving par. The Spaniard  addressed the ball and chipped a great shot that came to rest about four and a half feet below the hole.

Hancock now had a chance to sink his birdie putt for the win. He put a great roll on the ball but it slid by just missing the  hole. When the ball finally stopped trickling it came to rest about three and a half feet from the hole. Carlos had new life with a chance to save his par and extend the match to another hole.

Unfortunately he missed his par putt just left. Hancock seized the opportunity for the victory by sinking his par putt. He had successfully defended his title by winning for the second year in a row.  After the trophy presentation as Cade and his dad left the course to travel home a bizarre thing took place. Myrtle Beach National is an Arnold Palmer Signature Course. The Hancock’s had had the opportunity to play this course on many different occasions over the years. Out in front of the club house is a statue of Mr. Palmer. We had passed it many times, but for some reason on this day Cade’s dad stopped and had Cade walk out beside the Sculpture and he took Cade’s picture with his trophy next to Mr. Palmer.

This was about 2:00 O’clock in the afternoon. At the time we had no idea of the news we would learn five hours later after returning home. One of the most legendary, iconic names in the history of golf, The King Arnold Palmer had passed away at the age of 87. A great couple of days was topped off with a bitter sweet twist with a tremendous loss to not only the golfing community, but the whole world in general.