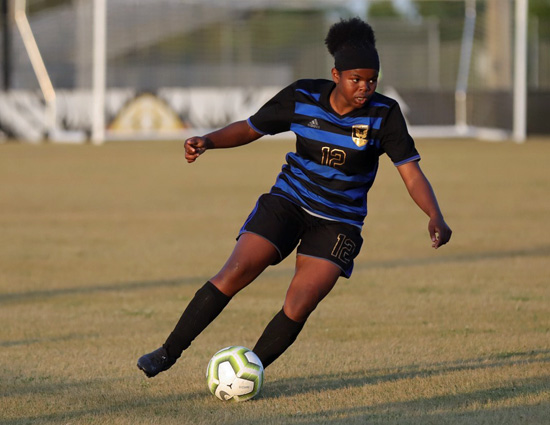 Maya McDonald Soccer Player of the Year; Jay Raynor Coach of the Year

East Bladen and Whiteville battled to a tie for the Three Rivers Conference girls soccer championship this season, and the two teams shared all of the conference’s top post-season honors.

Whiteville and East Bladen both placed five players on the All-TRC squad and both teams had six players receive honorable mention.

“Maya had an outstanding season,” said Coach Raynor. “She is a dynamic player who has the ability to takeover the game. We thrived off of her attacking mindset and her ablility to run at girls. Her desire to compete makes her special. She pushes herself and wants to not only play but dominate.”

McDonald fired in a whopping 37 goals, dished out 14 assists and averaged 15 steals per game.

“Some of her goals were unbelievable and showed composure that you normally see with older players,” continued Raynor. “What makes Maya special besides her athletic ability is who she is as a person and as a teammate.”

Raynor led the Lady Eagles to a 13-1 league record and 17-2 overall mark. East Bladen reached the second round of the NCHSAA Class 2A state playoffs before being eliminated by Wheatmore 2-1.

Wober fired in 27 goals, was credited with 18 assists and racked up 12 steals per game. Medina was a stalwart defender with 17 steals per game and also tallied 10 goals and 8 assists.