It was a memorable tennis season for West Bladen senior Savannah Lee. The Knights’ No. 1 player reached the NCHSAA 2-A state tournament on Friday, Oct. 26.

She lost in the first round to Zoe Huffman of Maiden 6-0, 6-0. Huffman went on to win the singles championship for the second consecutive year.

The West Bladen boys’ soccer team remained in the hunt for a postseason berth with a win against West Columbus on Saturday, Oct. 27 and a shootout win against Whiteville on Monday, Oct. 22.

In football, East Bladen notched a pair of wins in rescheduled games to remain unbeaten in Three Rivers Conference play. Zach Meares’ touchdown run with 17 seconds left and Gabe Barber’s conversion kick lifted the Eagles to a 21-20 win over Red Springs on Tuesday, Oct. 23. It was much easier on Saturday, Oct. 27 as the Eagles routed South Robeson 49-14.

Elizabethtown was the only middle school football team to win during the week. The Cougars rolled past Acme-Delco 38-6 on Tuesday, Oct. 23. Malcolm Bolden scored four touchdowns. 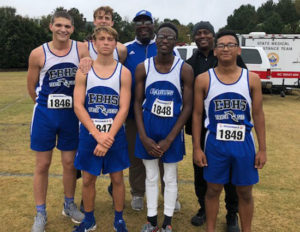 The N. C. School of Science & Math won the team competition, and their runners claimed the first three places in the individual race. Senior Trevor Pharr took first place with a time of 16:27.87.