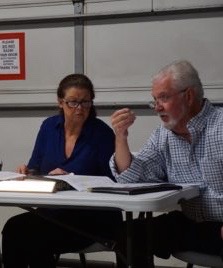 Investigations can be tiring for many under the microscope. After working for several years at the Bladen County Board of Elections, one employee has turned in their retirement letter.

Bladen County Board of Elections Director, Cynthia Shaw, is retiring, according to Greg Martin, Bladen County Manager. Shaw submitted her retirement letter back in August of this year. After years working in the elections office, Ms. Shaw started thinking of retiring back in 2016.

The Bladen County Board of Elections voted Valeria Peacock McKoy to serve as the Interim Director and Gina Ward, Deputy Director. Shaw’s last day in the local election’s office was November 28th, 2018, but she will officially retire in January, according to McKoy. Although Shaw, McKoy, and Ward are only employees given the task of assisting county, state and citizens in sifting through the elections, the demands seem to be daunting over the past several elections.

Swarms of phone calls and visits are keeping the election staff from their job duties behind the counter according to McKoy. Numerous media outlets and people from the general public are contacting the local office regarding the NC State Board of Elections and Ethics of alleged irregularities in the US House 9th District race in Bladen County.

McKoy said there were no answers given to the local elections office as to why the one commissioner’s office and the Soil & Water Director offices were the only two local offices not certified by the state. She explained the Bladen County Board of Elections received a notice stating the Bladen County Commissioner for District 3 and the Soil & Water Director were not certified by the state as well as the US House District 9 race, involving Republican Mark Harris and Democrat Dan McCready.

According to a release from NC State Board of Elections Spokesman Patrick Gannon, “In his motion, Board Vice Chairman Joshua Malcolm cited the Board’s authority under G.S. 163A-1180 as the reason for delaying certification of that contest.”

“I have no numbers to compare at this time,” McKoy said.

There was another protest filed in 2016 by Kenneth Register, a Democratic candidate for Bladen County Board of Commissioners. He allegedly witnessed several “software glitches” and saw a memory stick being changed out at a polling location during the Early Voting process. Register’s protest was denied on appeal by the N.C. State Board of Elections, and Dowless’ protest was dismissed due to lack of evidence.

New members of Congress are expected to be sworn in during the month of January and the Bladen County elected officials held their swearing in ceremony on Monday, December 3, 2018. BladenOnline.com will report more information as soon as it becomes available.