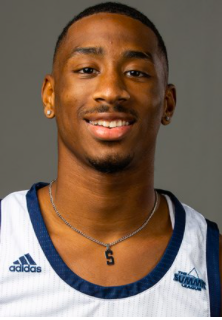 Boykin, the 2019-2020 Three Rivers Conference Player of the Year, has already enrolled in classes at UNCP but will have to sit out the 2020-2021 season due to NCAA transfer rules.

The White Oak native scored 24 or more points in 20 games during his senior season for the Knights including his final 14 games in a row. Boykin averaged 26.1 points per game and scored all 41 Knight points in a game against East Bladen. He poured in 35 points against East Columbus and 32 in a win over Clinton.

“Tyre had an unbelievable season in what was a trying one in regards to wins and losses,” said Knight Coach Travis Pait. “He was an unbelievable leader and always kept the team first in all that he did.”

Boykin played in 2 games this season for UMKC, including an 8-point, 2-assist performance in a 105-35 Kangaroo victory over Culver-Stockton. He also contributed a block, a rebound and a steal in a win over Greenville.

“Tyre is an explosive athlete who impacts the game with his multi-level scoring, but he is also tough enough to battle on the boards and make plays for his teammates,” Richards said in a UNCP press release. “He has the ability to be a lockdown on the ball defender, and is an extremely high-character person. We are very thankful that he decided to come back home!”