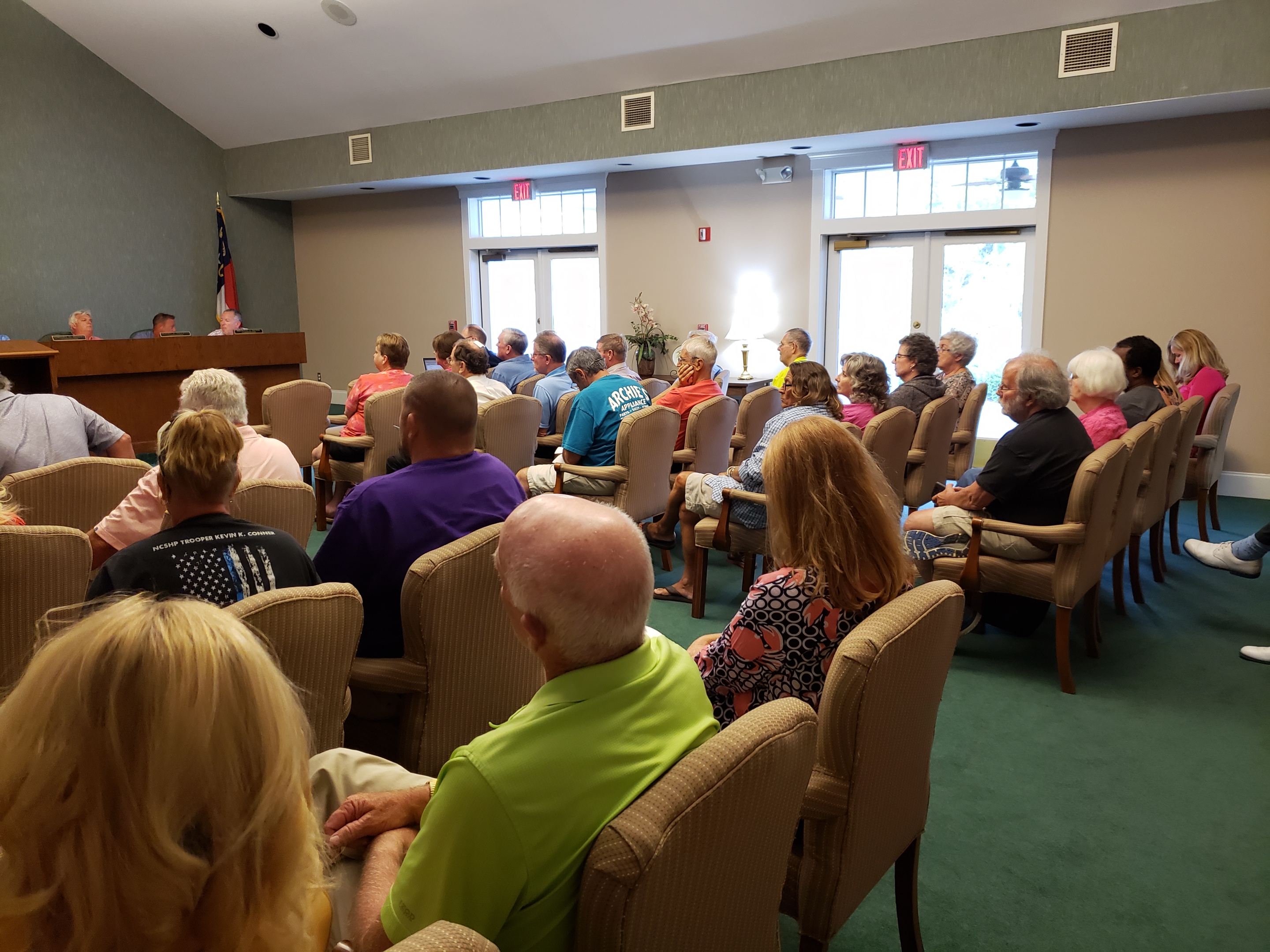 By bladenonline on 06/12/2019
By Joy Warren
Citizens of White Lake shared their concerns during the Town of White Lake Board of Commissioners meeting Tuesday evening.  Many spoke regarding the low level of the Lake and coming with an expectation that the Board needs to “do something about it”.
Residents on the Hwy 53 side complained of not being able to get their boats out in the water.  They also expressed concerns about injuries due to people not being aware of the low level and jumping from piers into shallow water.
A petition was also presented requesting that the Board do something to increase the lake level.  David Clark reminded those in attendance that the reports received from the Bald Head Conservancy as well as from Dr. Diane Lauritsen who is managing the Lake Water Project, have all determined that 95% of the lake water comes from rainwater.

Paul Butler reminded everyone that the State owns White Lake, not the Town.  “Our efforts should be geared toward the Department of Natural Resources and members of the General Assembly” said Butler.  “It’s a Lake…I don’t know of anything else we can do…we have had high temperatures and very little rainfall said Mayor Womble.  Womble indicated several times that he has met with Ed Wilkerson with State Parks and shared concerns.  Wilkerson is to meet with his supervisors in Raleigh regarding the possibility of changing the outflow at Turtle Cove if it will not affect the quality of the lake water.

Womble assured everyone that the Town is doing everything within their power to maintain the lake.  Any citizen can come by the Town office to read any reports that the Town has received so far.  The Town is sharing information as well on the town website http://www.whitelakenc.org/ .
Womble shared the latest report received today from Dr. Lauritsen.  The report stated that while the nutrient levels in the water column are now equivalent to what they were 6 years ago, this does not mean that there are not nutrients in the lake.
According to Lauritsen, “existing conditions will likely transition into a more “normal” summer — filamentous algal mats and vegetation (“seaweed”) will continue to be visible in near shore areas and where abundant, these can be removed from the shoreline with a dip net or rake.”
Crews from NC Aquatic Weed Program or NCSU are out monitoring vegetation monthly, on the lookout for the invasive weed Hydrilla.  Mayor Womble shared that the first meeting in a series, “Understanding White Lake and Its Management Challenges”, is scheduled for Tuesday, July 9th from 4 to 6 p.m.  Everyone is encouraged to attend.
Mayor Womble introduced Angela James as the new Postal Clerk.  She joined the administrative team on April 1st.
The Board approved the Fiscal Year 2019-20 Budget after a public hearing.  There were no citizen comments.  There will not be any increase in the tax rate for the upcoming year.
In administrative matters, the Board approved Utility Releases ($1,629.10), Tax Releases ($15.14), Tax Refunds ($28.73); released 2008 uncollected taxes and delinquent utility accounts; approved Town mission statement; adopted resolution for State SRP Loan for Sanitary Sewer Improvements; approved Inmate contract, and low bid for Generator replacement.
The municipal complex will be closed Thursday, July 4th in observance of Independence Day.  A public works employee will be on call to respond to any water/sewer emergencies.