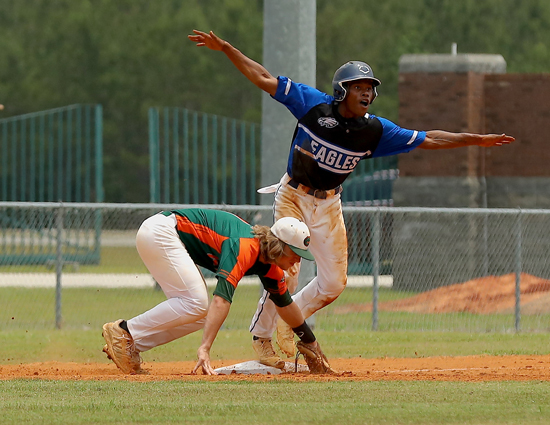 LAKE WACCAMAW – Senior Zach Meares pitched a 3-hitter and struck out 11 batters to lead East Bladen to a key 3-1 Three Rivers Conference baseball victory over East Columbus Saturday that clinched the TRC’s No. 1 Class 2A playoff bid for the Eagles.

The victory also moved the Eagles into 1st place in the Three Rivers with a 6-1 league record and a 9-4 overall mark. East Columbus dropped to 4-1 in conference play. 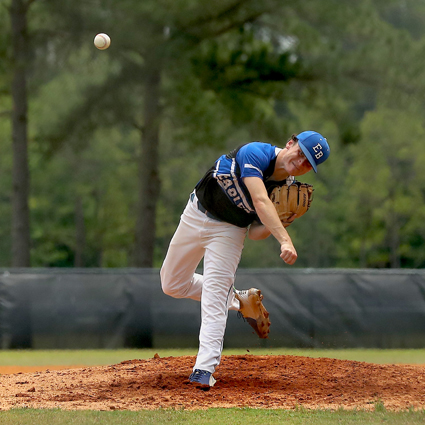 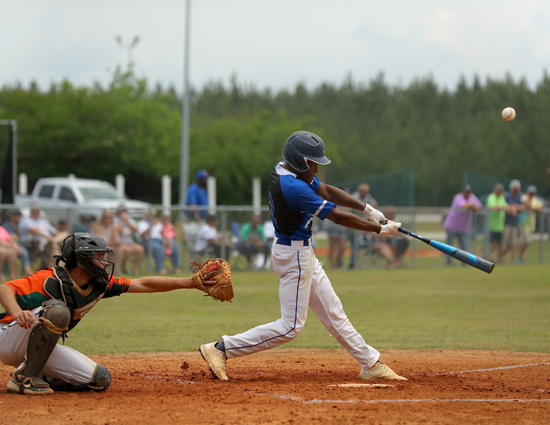 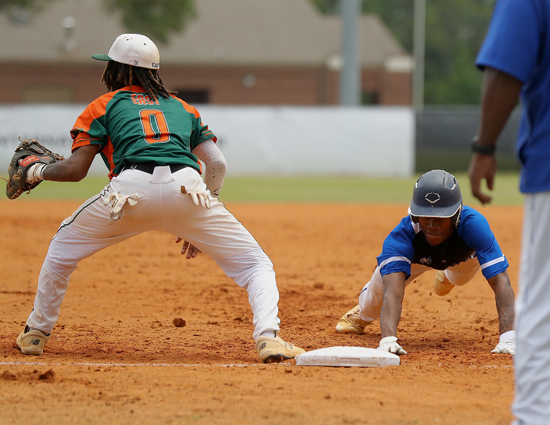 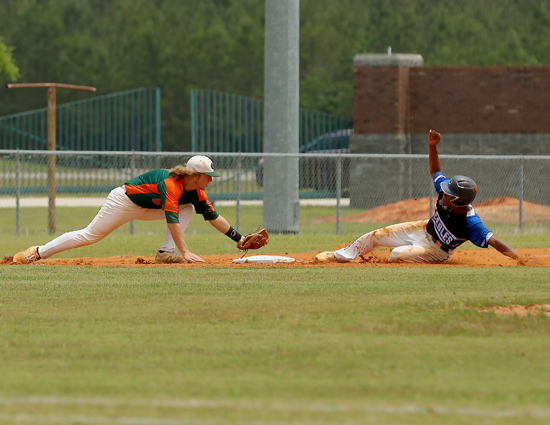 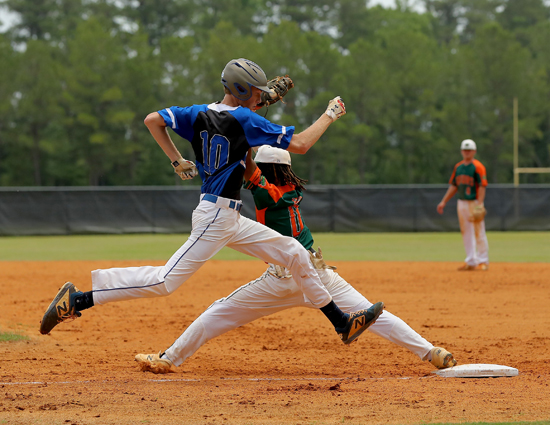 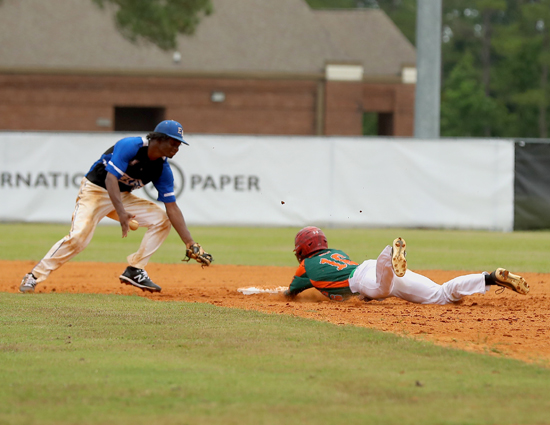 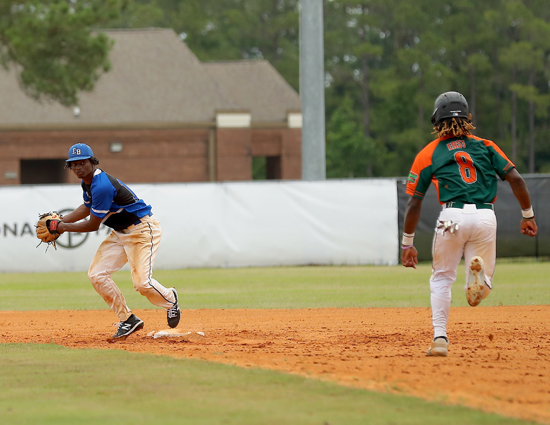 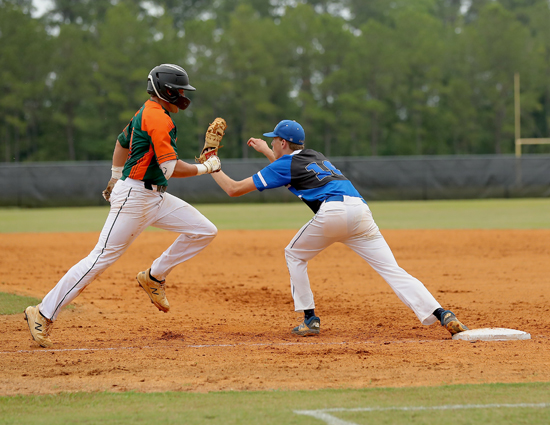 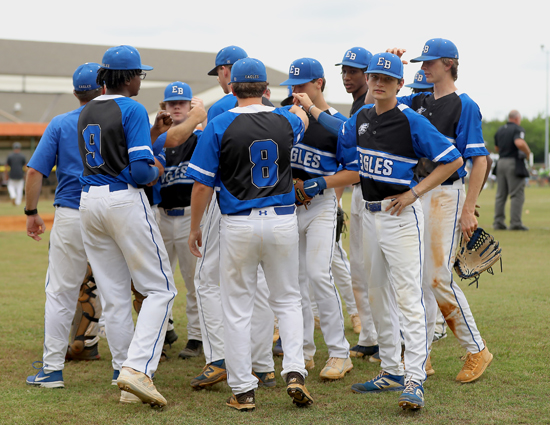 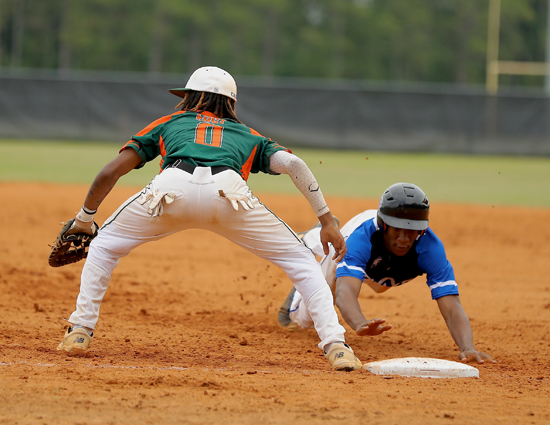 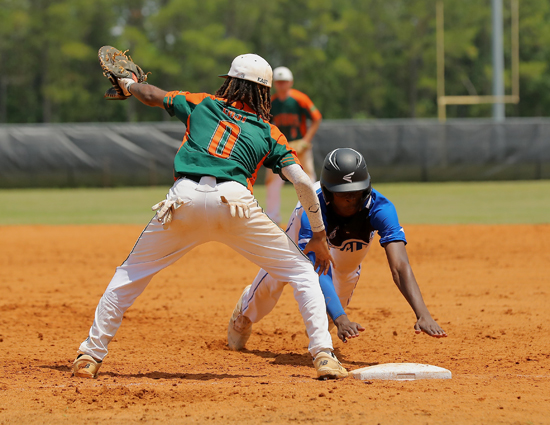 The Eagles grabbed an early 1-0 lead when senior Lefredrick Wooten beat out an infield hit, moved up when senior Brady Hollingsworth was hit by a pitch then stole 3rd base. Wooten dashed home as senior Drew Sholar reached base on an error.

Pitcher Elijah Bunting ripped a double into the left field corner to start the Gator half of the first then advanced to 3rd base as senior Coltin Simmons legged out a bunt single. Bunting scored on an error to tie the game 1-1.

Senior Rasean McKoy beat out an infield hit to start the East Bladen 5th inning. McKoy stole 2nd base and advanced to 3rd base on a passed ball. Meares walked and Bunting was relieved by sophomore Aaron Mitchell. Seniors Jacob Priest and Hollingsworth drew walks to force home McKoy with the go-ahead run.

Junior J. J. Faulkner pounded a 1-out double to left-center field in the Gator 6th inning, but Meares worked out of the jam via a fly out to center and a ground-out to shortstop.

Priest lined a lead-off single to right field in the Eagle 7th inning. One out later, senior Jerome Beck relieved Mitchell on the mound for East Columbus, and sophomore Zamar Lewis was inserted as a pinch-runner for Priest. Hollingsworth spanked a single to rightfield that sent Lewis to 3rd base.

Tyler Hill came on as a courtesy runner for Hollingsworth, and a throwing error by Beck on a pickoff attempt to get Hill at 1st base allowed Lewis to sprint home with an insurance run.

Meares retired the Gators 1-2-3 in the 7th on a strikeout, a fly-out and a pop up to end the game. He allowed 2 walks and an unearned run in his 7 innings on the hill in addition to the 3 hits.

McKoy batted 2-for-3 with a run scored and stole 3 bases in the game. “When we get the ‘Deer’ on base we want him to run, “ said Eagle Coach Grant Pait about McKoy.

“Great work by our guys on the Saturday after graduation and before the prom tonight,” continued Pait. “Lots of distractions, but they are good distractions. You know during baseball season you are going to have graduation and the prom. East Columbus came out hitting but we responded.”

Bunting and Faulkner hammered doubles to lead the Gator hitters, and Simmons had the bunt single. Bunting pitched 4-plus innings and allowed 2 runs – 1 earned – on 2 hits and 2 walks. Mitchell worked 2.1 innings of relief and gave up a run on 2 hits and 2 walks. Beck allowed 1 hit in his 0.2 scoreless innings.

The Eagles travel to West Bladen Friday needing a victory to assure themselves a share of the conference title. East Columbus has road games remaining at Red Springs, Fairmont and West Columbus.