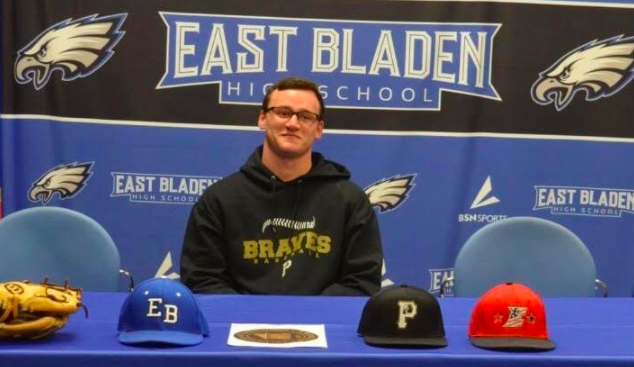 With his family, coaches and school administrators in attendance Thursday, East Bladen senior Zach Meares signed to continue his baseball career at UNC-Pembroke for the 2021-2022 season.

“I am thrilled to become a Brave and look forward to the journey!” said Meares back in September when he announced his commitment on Twitter.

During the Eagles run to the fourth round of the NCHSAA play-offs in 2019, Meares batted .407 with 7 doubles, 24 runs scored, 5 stolen bases and 9 runs batted in and was used mainly at shortstop, but he wanted to be ‘pitcher-only’ at the next level and that is how the Braves recruited him.

“He threw 3 straight innings at a UNC-Pembroke camp in Lumberton and struck out everyone that he faced,” said Shannon Meares, Zach’s mom. “He was only throwing 84 mph, but they couldn’t touch him. The (UNC-P) pitching coach said they could work with him to get his velocity up. They were really impressed with his ability to place the ball.”

Having Zach close to home was also a big factor for Anthony and Shannon Meares, Zach’s parents. “I want him to be able to drive home every day,” said Shannon. “Or maybe I can drive there and see him.”

Zach credited Coach Jeff Jefferson with recruiting him and thanked both Head Coach Paul O’Neil and Jefferson for the opportunity. Before COVID-19 ended the 2020 UNC-Pembroke baseball season in March, the Braves were 18-5 and riding an 11-game winning streak.