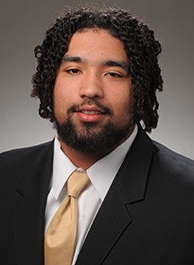 West Bladen grad Brandon Council was a consistent and versatile performer on the offensive line for the Akron Zips football team this season.

Council, primarily a left guard, started all 12 games for Akron including 2 games at center and 3 games at offensive tackle.  The 6-4, 325-pound redshirt junior named the season opener at Illinois as one of his favorite games.

“To play against a Big Ten team, that was a highlight,” said Council. “I had seven pancake blocks and didn’t allow a sack.” In fact Council didn’t allow his individual opponents to record a sack all season.

It was a solid season for the Tar Heel native who was returning from a 2018 season in which he started the first three games at right tackle before suffering a season-ending injury.

One highlight for the Zips in 2018 was a stunning 39-34 win at Northwestern in which the O-line allowed no sacks. Council had been named the Most Improved Player on offense following spring drills.

As a redshirt freshman in 2017, Council played in 10 games with nine starts at left guard for a Zip team that won the Mid-American Conference’s Eastern Division and played in the Boca Raton Bowl.

Council shared that he has been well-pleased with his Akron career. “We have done a good job of rebuilding and things should be much better next season,” he said.

Brandon is the son of Angel Jones and Robert Council and has already earned a degree in sports management. He will now be working on his masters in business administration.