Biser (pictured in middle) worked for the Whiteville-based newspaper for parts of five decades covering Columbus County sports. He retired in 2021. 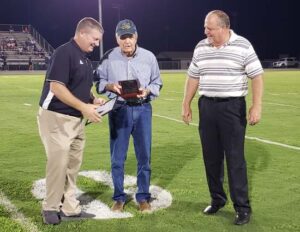 It was a well deserved recognition for a man I came to know in the early 1980s when I was working at The Bladen Journal and stayed in contact with during stops at The Richmond County Daily Journal and The Fayetteville Observer. He not only was a terrific reporter, but an even better person. Always willing to help. Always willing to chat. In a profession where self-promotion and “having a take” are often the norm, Dan is quiet, unassuming and always a true professional.

• Next time we’re having a drought let’s schedule a NASCAR Cup race at the old Dublin Speedway. That should bring a monsoon. I haven’t tracked it, but it seems a lot of races have weather delays. NASCAR will try again Sunday morning to race at Daytona International Speedway.

Rory McIlroy is four shots behind going into Sunday’s play in the Tour Championship. The leaders must finish their third round in the morning, then play the final round. McIlroy looks ready to make a run to the top of the leaderboard.

FRIDAY’S PICK: Look for Patrick Cantley to make a move in the second round of the Tour Championship after opening with an uninspiring even-par 70. The defending champ will do much better Friday. RESULTS: Cantley was better, shooting a 66, but struggled with his putting and was 7 shots behind leader Xander Schauffele after two rounds.