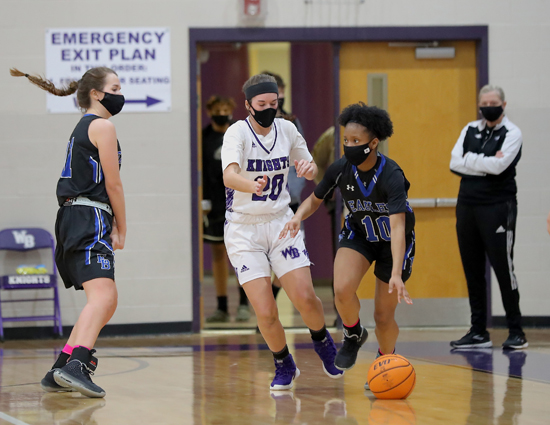 Freshman Mallory Bryan bombed in the Lady Knights’ only 3-point shot of the game to vault West in front 17-16 with 5:05 left in the 1st half. Sophomore AnnaGrey Heustess answered with a 3-point bomb for East, but Bryan turned a feed from sophomore Makayla Wright into a lay-up and a 19-19 tie 3:43 before halftime. 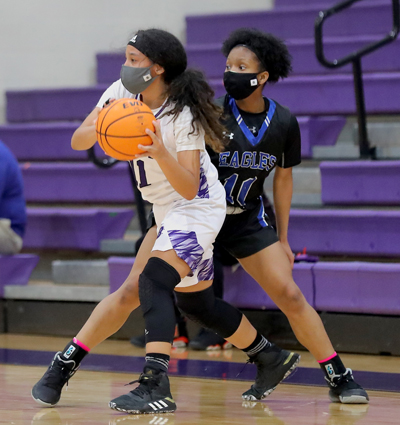 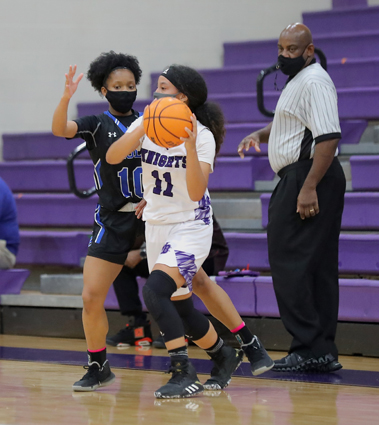 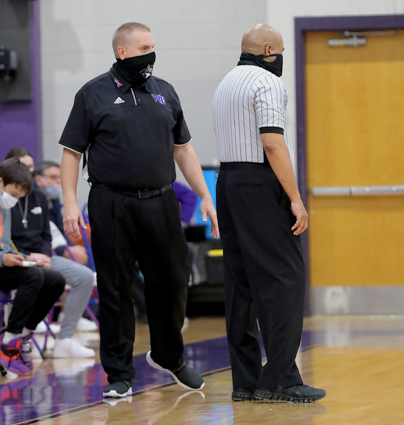 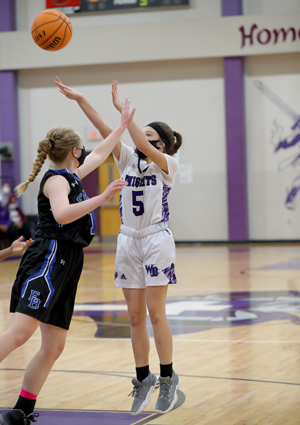 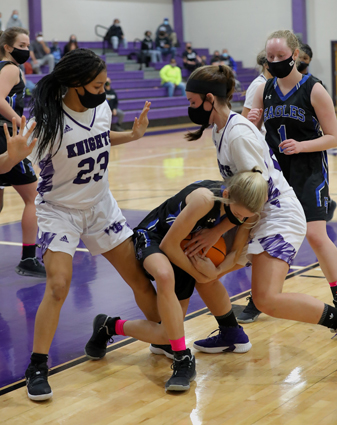 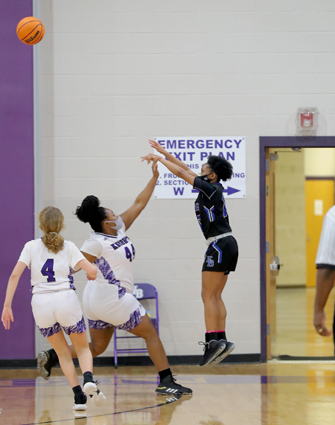 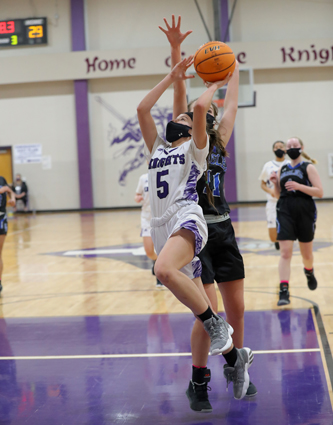 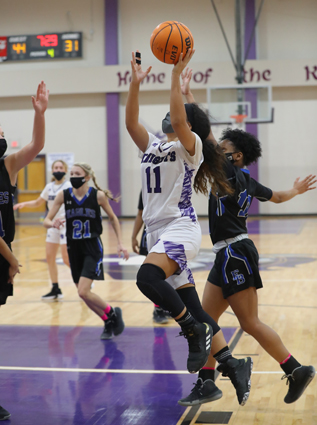 Evans toed the 3-point line with her first long shot, but then delivered a pair of 3-balls to spark a 13-2 Lady Eagle run. Mitchell converted a West turnover into a lay-up, but after Bryan sank 2 free throws, sophomore Karli Priest beat the halftime buzzer with a 3-ball that lifted East to a 32-21 halftime lead.

The Lady Eagles made seven 3-point shots in the game – 4 in the 2nd period. “That was a nice surprise,” said East Bladen Coach Patty Evers. “We have been shooting better, and we shot the ball well at Fairmont (Wednesday).”

Sophomore Rylee Chadwick drove for a trio of West Bladen lay-ups in the 3rd quarter and tacked on free throws to convert 2 of those into 3-point plays. Priest popped in a 12-footer, and Mitchell nailed a 3-ball and canned 5 of 6 free throws to push the East lead to 42-29, before freshman Megan Pait’s follow shot trimmed the margin to 42-31 at the quarter break.

Sophomore Maegan Burney started the final period with a Lady Eagle lay-up, but Wright attacked the basket for a trio of lay-ups that sliced the lead to 44-37 with 4:33 remaining. Mitchell cashed in 2 free throws, but Chadwick snatched a loose ball and dropped in a lay-up to pull West to within 46-39.

Burney began the game with a free throw and 2 lay-ups, and Heustess fired in a 3-ball. Wright pumped in a 16-footer, and Hannah Pait powered in a follow to keep West within 8-4. McDonald and Wright traded foul shots, before Chadwick put back her own shot, then tied the game 9-9 with a corner jumper.

McDonald drilled in a deep 3-pointer to give East a 12-9 lead at the break. Free throws by Mitchell and Burney, and a McDonald follow shot padded the lead to 16-9. Chadwick scored on another rebound basket, and Wright hurled in an acrobatic runner. Singletary connected on a free throw to pull West to within 16-14.

“We played about as well as we can play, but we had too many turnovers (22 that resulted in 15 points),” said West Bladen Coach Brian McCleney. “We missed some open shots, and we got beat some of the time on our defensive rotations. But I am proud of this group of mostly freshman and sophomores, and we look to get better in the off-season.”

East Bladen finished in 3rd place in the TRC with a 5-2 league record and 8-2 overall mark but will not make the playoffs since only 16 teams in the Class 2A East are being chosen. Having 2 games against East Columbus cancelled did not help.

“I am proud of the girls and the 3rd place finish,” said Evers. “We tell the girls at the start of the season 1st, 2nd or 3rd place that is our goal.” This is only the 2nd time in the history of the school (since 2001) that East Bladen has placed 3rd.” All of the other years they were either 1st or 2nd.

Evers praised her 4 seniors (Lily Lin, Sara Gargala, Katie Evans and Aaniyah Jackson), “They give us great leadership. They are good girls. I am proud of them.”

The Lady Knights completed their season with a 4-4 league record and a 6-5 overall mark.