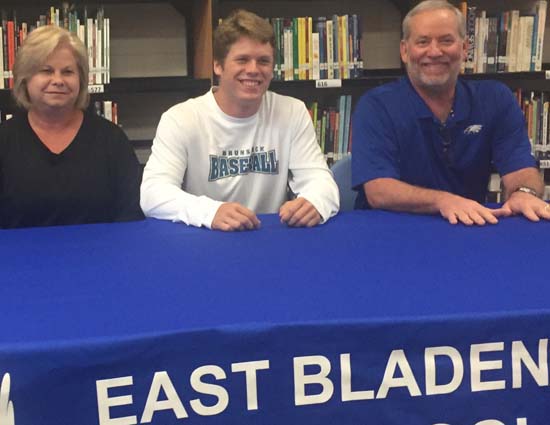 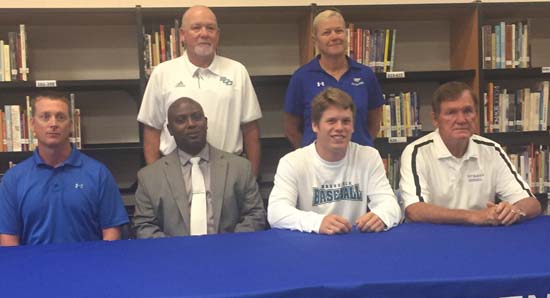 But as the coaches and administrators shared reflections on Tatum’s athletic career the emphasis was not on his athletic abilities but on his character and leadership abilities.

“Kyle is a model student-athlete,” said Principal Jason Wray. “Not only on the field but in the classroom. Colleges can find the 1000-yard rusher, home run hitter anywhere, but the hard work, commitment and leadership he shows is rare and that’s the difference.”

Athletic Director Patty Evers talked about Tatum’s work ethic. “The extra time he puts in the batting cage; the working to improve and not being bored with the repetition – that is a testament to his success.”

“Kyle’s been the backbone of our team,” said East Bladen Baseball Coach Russell Priest. “I think he is going to do great things – both on-and-off the field.”

Tatum led the Eagles with 45 hits and a .625 batting average. He slammed 8 doubles, 2 triples and a home run as the Eagles posted a 15-7 record and reached the second round of the Class 2A play-offs. Tatum, a 4-year starter at catcher, drove in 34 runs and scored 33 runs.

Tatum, a top-ten student at East Bladen, was accepted at a number of four-year schools – North Carolina State, East Carolina, UNC-Wilmington, Mt. Olive and Campbell – but Brunswick offered a chance for Kyle to continue to play baseball while completing his first two years of college work.

“I really wanted to play baseball, and BCC gives me a chance to do that,” said Tatum. “They have a great program, and I really like the coaching staff. They have unbelievable academics, and all of their classes are transferable.”

Those four-year schools will still be there when Tatum completes his two years at BCC. Kyle hopes to major in either engineering or business.

Brunswick Coach Robbie Allen, a Tabor City High grad who spent six years in the Dodgers organization, was at East Bladen for the ceremony. “We are excited. He has the leadership skills that we are looking for. He is versatile and athletic.”

“We are limited to a 30-man roster, so Kyle’s ability to play multiple positions is important,” continued Allen. “We hope he can catch some, but he will help us make that decision. We want him to be comfortable about where he plays. We only have him for two years, so I tell our sophmores that we don’t recruit to back-up, we recruit to replace.”

In 2017 the BCC Dolphins posted a 40-17 record and were eliminated in the regional semi-finals. Over the past two seasons Coach Allen’s Dolphins have won 80 games. “The bar is set high,” said Allen. Another focus for Allen is to get the Dolphins’ team Grade Point Average back over 3.0.  This past season the team GPA was 2.92.

“It’s a good fit for Kyle,” said Chris Tatum, Kyle’s dad. “It’s a good program with great facilities. They have a great-looking field, and a new batting cage. I am glad it is close by.”

“I am glad we will be able to go see him play,” said Kyle’s mom Dana. “I am so proud of him. He has always been self-driven to succeed.”

Tatum who was also a Class 2A All-State defensive back on the Eagle football team was named East Bladen’s 2016-17 Male Athlete of the Year Tuesday night.