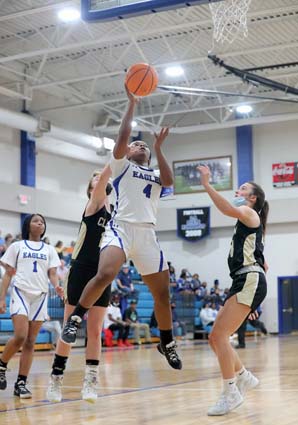 ELIZABETHTOWN – East Bladen’s Lady Eagles bombed in nine 3-point shots Tuesday night and closed out the game with a 17-4 spurt en route to a 61-36 victory over Clinton in the opening round of the NCHSAA Class 2A Girls Basketball Play-offs.

Coach Patty Evers’ Lady Eagles improved to 24-3 and advanced to Thursday night’s 2nd round game at Beaufort against No. 4 seed East Carteret (17-2). East Carteret advanced with a 58-45 win over Edenton Holmes. Clinton finished their season with a 10-13 record.

“We have been working on squaring our shoulders better on our outside shots,” said Coach Evers. “We have been rushing our shots too much, and we need to be able to make some from outside as we go deeper into the playoffs.”

Senior Maya McDonald fired in the other 3-ball for East and keyed the defensive effort with 10 steals to go with her 8 points and 6 rebounds. Freshman Iveonna “NeNe” Ward snared 6 rebounds and tallied 5 points, and freshman Laila Smith added 4 points.

The Lady Dark Horses hung tough early as the Lady Eagles needed a pair of Mitchell 3-balls and a 3-ball and a lay-up from Heustess to build an early 13-8 lead. A Laila Smith feed produced the Heustess lay-up, and Ward sank 2 free throws.

Heustess buried a 3-ball and 2 free throws, and McDonald drained a corner 3-ball and a free throw to start the 2nd quarter. Burney turned a Mitchell feed into a lay-up and a 24-11 lead. Laila Smith banged in a pair of buckets to keep the margin at 28-16 – one off of a Burney pass and the other a fade-away off of a rebound.

Clinton’s Khaliah Chestnutt muscled in a follow to trim the margin to 28-18 at halftime. Chestnutt, the Lady Dark Horses leading scorer, was limited to only 4 points in the game. Anna Perry Sinclair’s follow shot to begin the 2nd half trimmed the East lead to 28-20.

Ward answered with a free throw, Burney put back a rebound, Ward flipped in a runner and Heustess swished a 3-ball that capped an 8-0 run and opened up a 36-20 lead. McDonald powered in a rebound, and Mitchell delivered a pair of 3-point shots that kept East up 44-32 at the quarter break.

The Lady Eagles reeled off 13 straight points to open the final quarter. Burney scored lay-ups off of assists from Mitchell and McDonald then put back a follow. McDonald tossed in a turn-around, Burney sent a pass to Heustess for a lay-up, and Mitchell knocked down another 3-ball to explode the lead to 57-32.

After a pair of Avery Evans lay-ups for Clinton, Burney scored inside again, and junior Brianna Phillips turned a feed from sophomore Zoe Smith into a lay-up.

“I was happy with the way we came out and played tonight,” said Evers. “The girls played hard.”