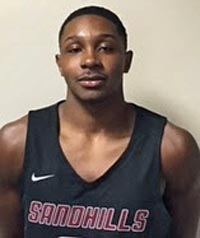 Dent is averaging 17.7 points, 8 rebounds and 2.4 assists per game for the Flyers who now own a 30-2 record and are ranked No. 1 in the NJCAA Division III national poll. Against Johnston Community Dent filled up the stat sheet with 17 points, 6 rebounds, 3 assists, 2 steals and 2 blocked shots.

The Flyers exploded in the second half and rode a 51-22 blitz to a 98-68 victory. Dent recorded a double-double of 20 points and 12 rebounds and delivered 5 assists.

Sandhills will host Region 17 champion Anne Arundel Community College of Arnold, MD Saturday at 1 p.m. in the Mid-Atlantic District Championship Game. The winner of that game will advance to the NJCAA Division III National Tournament in Rochester, MN on March 11-14.