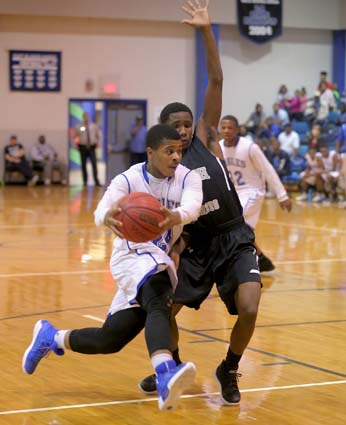 Points were hard to come by in the opening quarter, but Eagle Junior Adonis Avery drove for a lay-up and hit a free throw, and senior Sincere Smith put back a rebound to give East an early 5-2 lead.

However the Eagles were held scoreless over the final 4:28 of the period, and guard Shiquaun Conyers scored a lay-up in transition and canned a 3-point shot to put South up 9-5 at the quarter break.

Smith drove the baseline for a lay-up, guard Messiah Leach made a free throw, and freshman Javant McDowell muscled in a rebound to pull East to within 12-10.

South Columbus went back up 16-10, but McDowell popped in a short jumper, and Deondre Newkirk banked in a 15-footer to slice the lead to 16-14 at halftime.

McDowell flipped in a jump-hook, and Smith raced end-to-end for a lay-up that tied the game 18-18. Conyers and Zach McCoy then keyed a 15-2 Stallion run that opened up a 33-20 lead.

A McDowell jump-hook ended the South spurt, and a McDowell blocked shot was grabbed by Leach who sped to the other end for a lay-up. Smith sank 2 free throws, and Avery drained a 3-point shot that sliced the lead to 35-29.

Conyers drove for a 3-point play that stretched the Stallion lead back to 38-29 at the quarter break.

Tyrek Long dropped in a pair of baskets to spark a 14-4 South Columbus closing run. Smith made 2 free throws and added a lay-up for the East points in the period.

“We took bad shots and turned the ball over too much,” said Eagle Coach Kenzil McCall. “We are not working the way that we play in practice. We have got to have better leadership from our older guys.”

Smith posted a double-double for the Eagles with 14 points and 12 rebounds. McDowell finished with 8 points, 6 rebounds and 4 blocked shots. Avery added 6 points and 5 rebounds.

The Eagles will travel to Red Springs Friday night.