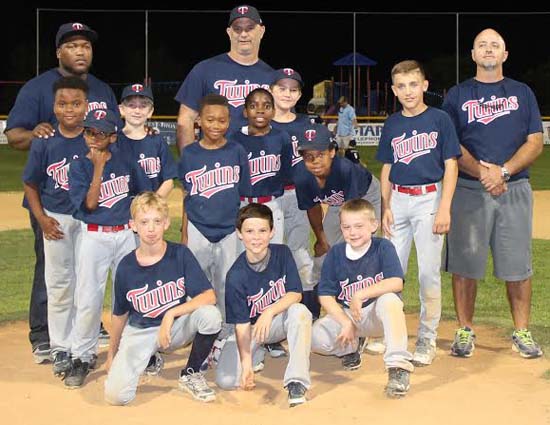 Natoren Corbett knocked in Cole Butler with the go-ahead run, and Torrean Cogdell struck out the side in the final inning as the Twins edged the Tigers 7-6 in the Elizabethtown Dixie Youth Baseball Minor League Tournament Championship Saturday at Leinwand Park.

With the scored tied 6-6 in the home half of the fifth, Butler walked, stole second base, moved to third on a wild pitch and raced home when Corbett belted a single to right-centerfield.

Cogdell walked the first 2 batters in the top of the sixth then struck out 3 in a row to end the game. Cogdell picked up the win with 2 innings of relief. Garrett Dunham struck out 7 in his 4 innings of work on the mound for the Twins.

Levi German led off the game with a single to leftfield, and Britt Sasser laced a single to right-centerfield. An error on the play scored German, and Sasser raced home on Hunter Smith’s sacrifice fly to give the Tigers an early 2-0 lead.

Hunter Elks drew a walk, stole second, advanced on a wild pitch and darted home on a throwing error to slice the lead to 2-1 in the bottom of the first.

The Tigers tacked on 2 runs in the third for a 4-1 lead. German beat out an infield hit and circled the bases on a passed ball, a wild pitch and a throwing error. Sasser walked went to third on the throwing error and scored when Parker Greene cracked a single to rightfield.

The Twins pulled even with 3 runs in the home third. Elks walked, and Cogdell beat out a bunt single. A throwing error scored Elks, and Dunham’s fielder’s choice plated Cogdell. Butler legged out an infield hit, advanced on a wild pitch and scooted home from second base on Corbett’s single.

Azaveon Robinson was hit by a pitch, and Blaine Pope and Charlie Edwards drew walks to start the Twin fourth inning. Elks hammered a double to left-centerfield that scored Robinson and Pope for a 6-4 Twin lead.

Sasser beat out an infield hit, and Smith drilled a single to right-centerfield in the Tiger fifth inning. Sasser darted home on a throwing error, and Jordan Hester’s fielder’s choice plated Smith with the tying run.

Corbett batted 2-2 with 2 runs batted in to lead the Twins at the plate. Elks doubled home 2 runs and scored twice. Cogdell and Butler added one hit each.

Dunham had an rbi. Butler scored twice, and Cogdell, Robinson and Pope scored one run each.

Sasser batted 2-2 with 3 runs scored to lead the Tiger hitters. German was 2-4 at the plate with 2 runs scored. Travis Taylor, Aquan Cotton, Hester, Greene and Smith connected for one hit each. Smith, Greene and Hester drove in runs, and Smith scored a run.

Smith struck out 5 batters in his 3 innings on the mound for the Tigers. Greene struck out 4 in his 2 innings of relief.